(1)  EDITORIAL:   Annals of Russian Insanity I

(4)  Another Russophile Disgusted by Russia

NOTE:  In a shameful display of cowardice, the Conde Nast publishing group is censoring an article from the American version of GQ magazine from running in the Russian version and refusing to place the article on GQ’s website.  GAWKER is running pages of the article, in the current issue, alongside a working Russian translation.  The article delves further into the allegations that the Putin regime, not Chechen terrorists, blew up Moscow apartment buildings in the 1990s.

EDITORIAL: Annals of Russian Insanity I

Annals of Russian Insanity I

We can’t help but remark again upon the amazing irony involved in the recent disaster at the Sayano-Shushenskaya hydroelectric plant.  When bombs exploded a decade ago in two Moscow apartment buildings, the Chechen rebels denied involvement.  The Kremlin refused to accept their denial, and insisted they were guilty.  As a result, the launched a massive invasion of Chechnya.

Yet in the case of the Sayano-Shushenskaya hydroelectric plant, where the Chechen rebels claimed credit for the explosion that crippled the plant, the Kremlin insisted they had nothing to do with it and ignored them.  How can this possibly be explained?

END_OF_DOCUMENT_TOKEN_TO_BE_REPLACED

Russia is in the process of constructing its largest aquarium in the city of Sochi at a cost of over $25 million. Scheduled to open later this month, Sochi Discovery World is supposed to be one of the chief attactions for visitors to the 2014 Olympic Games.

END_OF_DOCUMENT_TOKEN_TO_BE_REPLACED

What was on that Ship, Mr. Putin?

In July, the Russian-manned cargo ship the Arctic Sea disappeared on its way to take timber from Finland to Algeria, sparking reports of the first incident of piracy in European waters since the days of the buccaneers. Experts and observers weighed in with their theories: the ship had been snatched in a commercial dispute; it was being used to run drugs; it was carrying something more precious — or dangerous — than timber.

END_OF_DOCUMENT_TOKEN_TO_BE_REPLACED

Another Russophile is Disgusted by Russia

Writing in the New York Times, not even rabid Russophile Anatol Lieven, a professor in the War Studies Department of King’s College London and a senior fellow of the New America Foundation, can contain his disgust at the barbaric dishonesty and ignorance of the people of Russia where their own history is concerned.  Russia again and again proves itself totally unable to do what other civilized nations can readily and even proudly do, take responsbility for their past mistakes and work to improve.  Instead, Russia wallows in childish denial, always pointing a finger at other and never, never at itself.  This is why Russia lags so far behind the rest of the world in development and why it seems doomed always to do so.  It’s quite true that other nations made deals with Hitler. What they didn’t do, however, is to attempt to share in Hitler’s illicit gains from imperlist aggression, nor did they make heros out of the men who made the deals, as Russia has done.

The Polish president, Lech Kaczynski, apologized this month for Poland’s role in Hitler’s partition of Czechoslovakia, stating that, “Poland’s participation in the annexation of Czechoslovakia in 1938 was not only an error, but above all a sin.” He should have added that this built on an earlier criminal error, that of Poland’s nonaggression pact with Nazi Germany in 1934, which effectively demolished France’s alliance system in Eastern Europe, and made it much harder to prevent Nazi Germany’s expansion in the mid-1930s.

END_OF_DOCUMENT_TOKEN_TO_BE_REPLACED 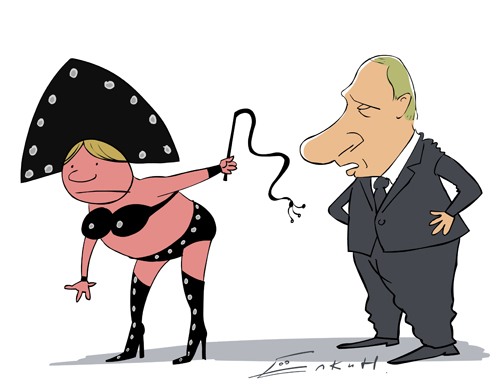 The Russian cartoonist known as Ellustrator (Sergei Yelkin) posts the above drawing with no caption or explanation.  A number of his Russian readers don’t get it. Do you? Any suggestions for what Putin might be saying?