EDITORIAL: Russia is a Nation of Murdering Bastards

Russia is a Nation of Murdering Bastards

“We don’t want this country to turn into Russia.” 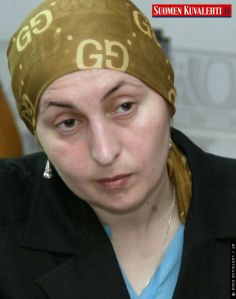 Zarema Sadulayeva in 2006. Murdered by the Kremlin last Tuesday. RIP

Blood is flowing in rivers in Vladimir Putin’s Russia. As a New York Times op-ed writer we publish below states: “Russia is getting away with murder.”

Stalin, through his malignant spawn, as we reiterate in an original translation today, is suing Novaya Gazeta, the newspaper which published Anna Politkovskaya, who was yet another entry in a seemingly endless string of obviously political murders that dates back to Vladimir Putin’s first days in the Moscow Kremlin, with the slaying of Duma deputy Galina Starovoitova.

Stalin is alive and well in Putin’s Russia, in more ways than one.  Stalin had Beria, and Putin has Kadyrov, his homicidal henchman in Chechnya, who is striking down the Kremlin’s critics with total impunity, so fast it is hard to keep up.  And he openly boast of his deeds and his hatred for the women who dare to challenge him.  He recently stated that Natalia Estemirova, Politkovskaya’s successor and struck down just like her, was “misleading people and writing lies.”  Before that, he publicly declared she had “no honor or conscience.”  He admits that he has “blood up to his elbows,” and the blood marks rose a little higher earlier this week when he brutally abducted and murdered children’s rights activist Zarema Sadulayeva and her newly married husband, stuffing their corpses into the truck of their own car.  His police, copying Stalin jot for jot, had rounded them up.

And why shouldn’t they?

What is Barack Obama going to do about it?  Obama has said nothing about Estemirova, and nothing about Sadulayeva.  He is too busy frightening his own people with his own efforts to roll back freedoms, it seems, to care about basic American values or security interests.  His mealy-mouthed statements while he was in Moscow a few weeks ago have obviously been seen by the Kremlin as weakness, as a green light to proceed with the final liquidation of all conceivable sources of political opposition anywhere it may be found.

But the main part of the blame for these barbaric crimes does not lie in Washington DC or even in the Moscow Kremlin. After all, Putin is a man who spent his entire life in the KGB and worships Stalin.  What else would one expect him to do if given power? Plant daisies?  His actions are entirely predicted, and indeed have been predicted for years right hear on this blog.

The real blame lies elsewhere. It lies with the people of Russia, those who enabled Putin and those who stand silent as he pursues his reckless crimes.  Cut off from feedback and criticism and given unlimited power just as Stalin was, Putin acts like Stalin.  And the cowardly, craven people of Russia at best, just as in Stalin’s times, do nothing.  At worst, they inform on their neighbors.  Who knows how the killers got the information they needed about Estemirova and Sadulayeva?  Maybe it came from ordinary Russians eager to get in good with the Kremlin. That was common in Stalin’s times.

This precedent for violence can only destroy Russia just as it destroyed the USSR. To say nothing of terrifying the population and preventing creativity and innovation, the Kremlin’s violence is in invitation to insurrection.  On Wednesday there was yet another assassination of a high-ranking cabinet minister in Ingushetia, showing that two can play at the Kremlin’s game.  Russia is destroying itself, once again, and the people of Russia are complicit.

We condemn their outrageous misconduct and demand that they begin acting like a civilized nation.  If they do not, they will richly deserve the barbaric suffering that is their inevitable punishment.

This entry was posted in chechnya, editorial, murders, russia and tagged russia, Sadulayeva. Bookmark the permalink.

45 responses to “EDITORIAL: Russia is a Nation of Murdering Bastards”