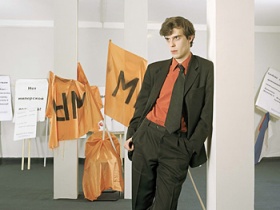 In December of last year, LR founder Kim Zigfeld devoted an installment of her Russia column on the Pajamas Media blog to Roman Dobrokhotov, leader of the opposition movement known as “We.”

At that time, Dobrokhotov was rattling Dima Medvedev’s cage during a speech, accusing him of talking about democratic values while his polices eradicated them, and being dragged out of the hall.  One would think it rather hard to top a performance like that, but only if one didn’t know Dobrokhotov very well.

A few days ago, Dobrokhotov and his democracy stormtroopers did something really breathtaking, clearly risking their lives for their cause and country. 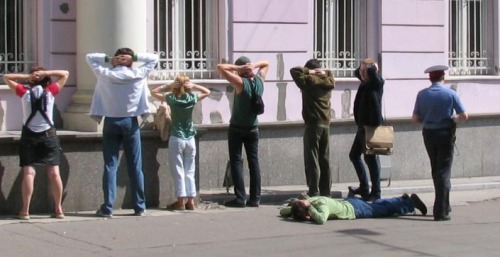 Above you see the members of “We” lined up in front of the Iranian embassy in Moscow. They were demonstrating in support of the Iranian opposition movement, which was standing up to the crazed Islamic fundamentalist dictatorship in Tehran following egregiously rigged elections. Among other things, the Iranian protesters were chanting “Down with Russia!” (some translate their word “margbar” as “Death to Russia!”) because of the Kremlin’s speedy support for the dictatorship after the results were announced.

Dobrokhotov then went even further. On his blog, he wrote that “We” would prefer it if the Iranians shouted “Down with Putin” rather than “Down with Russia” — in other words, he made a direct personal attack on Vladimir Putin himself, in Russian, in Russia, where Putin can have at him any time he likes, and in the immediate wake of the killing of not one but two prominent Russian human rights activists.

This is what real Russian patriotism means.  This brilliant young man is willing to risk all to speak truth to power, even though the vast majority of his countrymen cower in the shadows.  But as long as such as he still exist in Russia, there is still hope.

Now, if only Barack Obama would learn his name.

One response to “EDITORIAL: Dobrokhotov, Defiant!”