(3)  Another Original LR Translation:  Latynina on the Gas Wars

(4)  Pasko on the Neo-Soviet Mails

“You understand that you are putting yourself in grave danger. You need to change your style of work.”

–Nurdi Nukhazhiyev, spokesman for Chechen dictator Ramzan Kadyrov, to Oleg Orlov, head of the Memorial human rights NGO, at a meeting on July 10, 2009, four days before Orlov’s lead journalist, Natalia Estemirova, was kidnapped in Grozy, murdered and dumped at the roadside in Ingushetia. 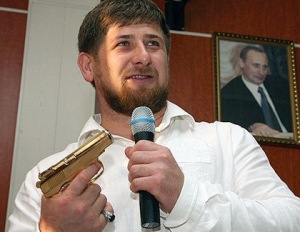 The man with the golden gun

You may find those words shocking, but they are nothing compared to what Kadyrov himself was prepared to say to Estemirova herself, in person. He stated:  “I have blood from my hands to my elbows.”  This was after calling her into his office to criticize her reporting of human rights abuses by his military cadres.  It was after Kadyrov “yelled at her, asked questions about who she lived with, where her relatives were and how old her daughter was.”  Alexander Cherkasov, a Chechnya expert at Memorial, told reporters at a news conference:  “With Kadyrov she spoke like a schoolteacher — she put this D-student in his place. But he knew how to do more than just spit wads of paper from the back row.”

Of course, the Russian media is not reporting any of it.

END_OF_DOCUMENT_TOKEN_TO_BE_REPLACED 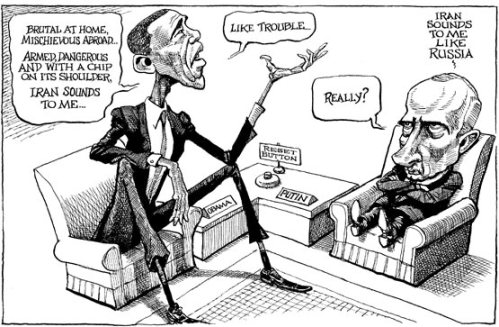 In yet another display of his awesome commitment ot democratic values an human rights, U.S. President Barack Obama’s stomach-churning inconsistency and weakness in Moscow recently has driven our Eastern European allies into a frenzy of panic.  Nearly two dozen prominent leaders including Poland’s Lech Walesa and the Czech Republic’s Vaclav Havel have written an open letter to Obama imploring him not to send signals to the Russians which could lead them to believe they are free to gobble up their former Soviet slave states in the region.  The Polish government itself has specifically endorsed the appeal.

END_OF_DOCUMENT_TOKEN_TO_BE_REPLACED

Russia’s Gas Weapon is a Boomerang

People have begun to take Russia seriously. In 2005, immediately after signing the agreement on building the North Stream pipeline, we announced that we now possessed an energy weapon. “Not to worry, it’s just words,” Europe responded. But the Kremlin has since then actually used the weapon.

And Europe has at long last started to take Russia at its word. Europe has realised that for Russia gas is not a commodity but a weapon. Yet all it takes to make it ineffective is to refrain from buying the stuff. Last Winter, Europe cuts its imports of Russian gas very significantly and just last week signed the agreement for the building of the Nabucco pipeline. So yes, the Kremlin is quite right: gas is a weapon. And I know the name and class of weapon it is – a boomerang.

END_OF_DOCUMENT_TOKEN_TO_BE_REPLACED

Hero journalist Grigori Pasko, reporting on Robert Amsterdam’s blog, reveals that the Kremlin has just seized the right, directly violating the Russian constitution, to open anyone’s mail any time it likes.  It’s such an outrage that even Russia Today is appalled!

As some of you have probably read in the news, this week my fellow citizens and I woke up to a new Russia, under even greater control by the inheritants of the KGB.  As initially reported by Newsru.com, “beginning on the 21st of July, law-enforcement organs will have unrestricted access to the postal dispatches of citizens – letters, parcels, remittances and so forth. Employees of eight siloviki structures of the RF – organs of internal affairs, of the FSB, of the Federal Protection Service (FSO) and foreign intelligence, as well as customs officers, workers of the Federal Service for the Execution of Punishments (FSIN) and Gosnarkokontrol – will be able to open mail for inspection.”  The report goes on to provide links to the corresponding order from the Ministry of Communication and Mass Communications, signed by Minister Igor Shchegolev, and to a list of requirements to networks and postal communications media for the carrying out of operative-and-search measures [detective work–Trans.] printed in Rossiyskaya gazeta [the official organ of the Government of the Russian Federation–Trans.].

END_OF_DOCUMENT_TOKEN_TO_BE_REPLACED

Putin caught in another Ridiculous Lie

Insufficient financing, some but not all the result of the economic crisis, and the active hostility of commanders and defense ministry officials, who prefer working with draftees, has blocked almost every step toward the all-volunteer military President Vladimir Putin called for more than five years ago, according to the Accounting Chamber. The findings of this review, Viktor Yuzbashev writes in the issue of  Novoye Voennoye Obozreniye released today, are “not reassuring” about either the ability of the armed services to reform themselves or the willingness of the political elite and the population at large to demand that they do and support them.