(4)  Goble on the Horror of Russian Bureaucracy

NOTE:  Kim Zigfeld’s latest installment of her Russia column on the mighty Pajamas Media blog takes Barack Obama to task on the Estemirova killing. His cowardly characterization of Vladimir Putin means he has blood on his hands, and that’s the name of that tune. His shameful response to the killing, not even as strong as Europe’s, hardly washes it off.  Kim also had a blog post on American Thinker covering the topic. 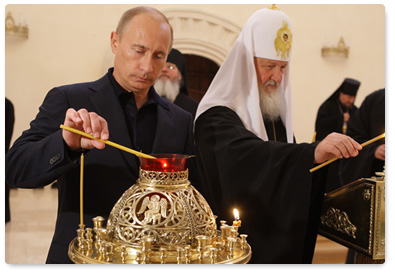 On July 9th, Russian “prime minister” Vladimir Putin and Russian Patriarch Kirill (the Slavic pope) paid a state visit together to the island of Valaam and its ancient monestary, a famous place of religious pilgrimage for Orthodox Russians.  The two have more than just Russian nationalism and religion in common:  It’s widely believed that Kirill, like Putin, was a member of the KGB.  Russia’s constitution, just like America’s, calls for separation of church in state; as with every other aspect of the document, Putin simply ignores it with impunity.

END_OF_DOCUMENT_TOKEN_TO_BE_REPLACED

EDITORIAL: Now, its Russia’s Turn for the Chills

Now, its Russia’s Turn for the Chills

Last winter, Russia sent chills down the spines of Europe’s huddled masses by turning off the spigots for the region’s heating gas, using a conflict with Ukraine as pretext.  Though Russia may have felt powerful in the short term, in the long term this may have been the single most costly of Vladimir Putin’s innumerable policy errors.

That’s because the result was the announcement last week of a deal between a group of major European nations, signed in Turkey, to build a brand new gas pipleline called Nabucco (after an opera by Verdi) which will circumvent Russia and allow Europe to draw on the stocks of Central Asia. In a final cruel cut, the Nabucco line will begin pumping gas in 2014, the same year Russia expects to host the winter Olympic games in Sochi.

And that wasn’t the end of Russia’s nightmare.

END_OF_DOCUMENT_TOKEN_TO_BE_REPLACED

A tradition that neo-Nazi Russia continues from its Soviet predecessor is hypocrisy in its awarding of medals, thus devaluing, and making a mockery of, these strange little bits of metal that states award their most exemplary citizens.

END_OF_DOCUMENT_TOKEN_TO_BE_REPLACED

Goble on the Horrors of Neo-Soviet Bureaucracy

Not only is the Russian bureaucracy now larger than the Soviet one it replaced, but it is more Kafkaesque, with those who must deal with it far less certain about who decides what or even whether there is anyone who can decide anything, according to a leading Moscow social critic.

END_OF_DOCUMENT_TOKEN_TO_BE_REPLACED

Sad though it is, man has seldom had much trouble killing his youngest fellows. If the ancient Spartans perceived any imperfection in a child, for instance, they would “expose” him, which amounted to leaving the child somewhere, perhaps a hillside, to die.

Of course, while not all civilizations held their offspring to the strict standards of the Spartans, infanticide was common in the pagan world. Despite this, it’s hard to imagine an ancient society that murdered its young on the magnitude of the modern world with its abortion-on-demand culture. And in this modern world, the culture of death is nowhere more intense than in Russia.

This is one of the facts we learn in the DVD documentary Killing Girls, a work about the lives of Russian women and, something that occurs all too often, the deaths of their unborn children. The documentary presents the stories of Anna Sirota, the narrator of the work, and three girls, Valya, 15; Nastja, 17; and Sasha, 16; all of whom had abortions. It also features the Family and Reproduction Center (such places are always euphemistically named, aren’t they?) in St. Petersburg, Russia, which offers late-term abortions to teenage girls.

END_OF_DOCUMENT_TOKEN_TO_BE_REPLACED

Reacting to the murder of Russian hero journalist Natalia Estemirova, the European Union stated:  “We condemn that brutal act and call for the authorities to try to establish who is responsible and take the action that is called for.”

Here’s what Barack Obama’s State Department had to say:  “The United States is deeply saddened by reports of the abduction and murder of respected human rights activist Natalya Estemirova.  We call upon the Russian government to bring those responsible to justice.”  Think that was just State, and Obama’s White House had stronger feelings?  Nope, they were “sad” too.  They were maybe a little sadder than state, to the point of being “disturbed.”  They called the act an “outrageous crime” but did not condemn it as the EU was willing to do.

The EU is outraged and condemns the brutality, the American president is “sad” about the murder and has no further comment.  We are disgusted beyond words. It feels as if Mr. Obama has declared war on La Russophobe.  And let’s be clear:  The EU statement was hardly all it should have been. Rather than “calling” for justice, the EU should have demanded it, and should have specified what steps it would take if Russia, once again, failed to deliver justice.  Europe has always looked to America for leadership on such issues, and now it is America that looks to Europe.  It is a nightmare.

Human rights leaders in Russia were not so cowardly.