NOTE:  In addition to two very serious items we offer a number of lighter features today as a weekend respite from an avalanche of hard news coverage, and in this spirit also bring it to your attention that the Kremlin has seen fit to censor an episode of South Park that contained a depiction of Vladimir Putin.  Russia: wimp nation.

The Russian Economy Continues its Freefall

Last week the price of crude oil went on a bender, shedding 15% of its value before recovering slightly late in the week. Unsurprisngly, by last Wednesday, the day after Barack Obama left Russia, the RTS dollar-denominated stock index (see chart, left) lost nearly 4% of its value and plunged below the important 900 point psychological barrier, closing at 889.  The MICEX ruble-denominated index was doing the same.  The RTS has now lost 300 points or one-quarter of its mid-June value, itself a gigantic dropoff of two-thirds from its high a year and a half ago.   It confirmed once again that the Russian economy is helplessly enslaved by a crude oil price set by foreigners with no regard for Russian interests.  The ruble’s value fell in lock step right along with the price of oil, almost as if it had no value indendent of crude (which is in fact the case).

The repercussions in the wider economy were predictable and plain to see.

END_OF_DOCUMENT_TOKEN_TO_BE_REPLACED

A group of legal activists is working in the Russian capital to help people moving there comply with the law and work with a government registration system unlike any in the world — except for the one maintained by the regime in North Korea, claims one of the leaders of the “Illegals of Moscow” movement. In an interview posted on the Chaskor.ru portal this week, that individual, speaking on condition of anonymity because of the risk of reprisal from officials, said that Moscow Mayor Yuri Luzhkov’s claim that such registration systems exist “in all the major capitals of the world” is simply “a lie.”

“There is nothing like [Moscow’s system] anywhere in the world,” the Illegals of Moscow leader said. Members of the organization “have specially studied this question, and the last country with such a registration [“propiska”] regime is the Korean People’s Democratic Republic” under Kim Jong-Il.

END_OF_DOCUMENT_TOKEN_TO_BE_REPLACED

Posted in freedom of movement, russia

Vassily Aksyonov, one of many former Soviet citizens to take up residence in the Washington area since the 1970s, lived among us for 24 years. He held a distinguished professorship at George Mason University; he became an avid Bullets fan; he fell in love with this country, which made him a citizen. You’ve probably never heard of him.

Yet his death Monday in Moscow at 76 will set off days of mourning in Russia, where our former neighbor was a superstar. Literarily, he played the role of a Russian Kurt Vonnegut, but Vonnegut would have envied Aksyonov’s stature in his homeland — closer to Tiger Woods’s or even Michael Jackson’s. Aksyonov realized during his American years that no writer here could ever enjoy such acclaim. Russians love their writers with a fervor unknown in this country.

END_OF_DOCUMENT_TOKEN_TO_BE_REPLACED

The Adventures of a Russian “Movie Star”

A former Goldman Sachs computer programmer charged by the feds with looting the investment bank of valuable trading-software code might have had a brighter future as a film star.

A 10-minute YouTube video featuring the romantic escapades of the programmer, Sergey Aleynikov and his wife, Elina, is showing a vastly different side of a man that prosecutors claim stole computer code that authorities say runs the risk of sapping millions from Goldman as well as manipulating the broader stock market. The video, which was first posted in November 2007 and appears to connected to the couple’s wedding, features Aleynikov as a lonely workaholic in search of his bride. After finding no success with an over-the-top matchmaker, Aleynikov stumbles upon a magic lamp containing a genie who grants him his one wish of the perfect bride.

In the final scene, Aleynikov and his wife dance a tango and appear on their way to a life of happily ever after. Alas, it’s just a fantasy.

END_OF_DOCUMENT_TOKEN_TO_BE_REPLACED

Putin seems to have been a little slow turning the head to the right on this one. Based on that facial expression, Does Putvedev think he/it has a live one? 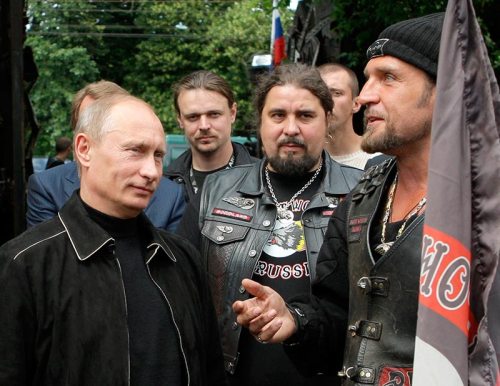 The Wolves welcome One of the Their Own.