Russia, it’s policy in shambles, is panicking and screeching hysterically about “foreign interference.” 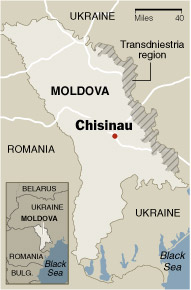 Russia is engaged in an ongoing imperialist struggle to break off a narrow segment of Moldovan territory known as Transdniestria, where there is a pro-Russian population similar to those in Abkhazia and Ossetia in Georgia.  Moreover, in Russia itself, the Communist Party is the only vaguely “oppositional” force in the parliament, and massive street protests in the captial are unheard of.  For all these reasons, events n Moldova strike terror into the hearts of the Kremlin’s denizens.

The Jametown Foundation’s Vladimir Socor has explained why the Communists are so popular in Moldova, and the Moscow Times has highlighted the extent of the Kremlin’s massive policy failure there.  As the MT states:

Anti-government protests in Moldova this week unfolded in a similar manner to Western-backed uprisings that toppled governments in Georgia, Ukraine, Kyrgyzstan and Serbia in recent years. But what should worry the Kremlin is not the threat of a similar uprising at home but the fact that both Moldovan President Vladimir Voronin and the opposition groups turned to the West instead of Russia to mediate the conflict, analysts said Wednesday. Because of the shortsightedness of Russian diplomacy and its failure to project its own “soft” power, the Kremlin faces the possibility of being sidelined once again in a former Soviet state that it considers to be within its realm of influence. “The policy mistakes are clear and were much discussed after the Orange Revolution in Ukraine,” said Nikolai Petrov, a political analyst at the Carnegie Moscow Center, referring to the weeks of street protests in what was once Russia’s strongest post-Soviet ally. The 2004 protests resulted in pro-Western Viktor Yushchenko winning the presidency over the Moscow-backed candidate.

And yet, the Kremlin must also see opportunity.  Maybe Putin’s thugs are already plotting some sort of military intervention, the only way it seems that Russia is able to make any “accomplishments” in dealing with its smaller neighbors in former Soviet space, sheer brute force.  Russians never tire of attacking Americans for using military power, yet they also never tire of making use of it themselves.  America, meanwhile, has a large following of friends and the world’s leading military alliance to boot, while Russia stands increasingly alone.

And after all, what did Russia gain from using military force in Georgia? Did it manage to oust the nakedly hostile government in Tbilisi? It did not. Did it manage to win the world’s respect for its military prowess?  No, it looked like an incompetent, aging bully.  And on top of all that, Russia set a precedent for secession which is now being invoked in places like Dagestan, along with the headache of managing Abkhazia and Ossetia without any direct benefit other than the annexation of territory Russia doesn’t need.

The Russian misadventures in Moldova ought to be a lesson, but it’s one the thugs who prowl the Kremlin are not nearly clever enough to learn.