As NATO dialogue with Russia resumed, the Putin regime got a brutally cold slap in the face late last week when, after apparently thinking it had pulled the wool over NATO’s eyes on Georgia, Russia suddenly found two of its key NATO staffers accused of spying and booted out of the forum.  It wasn’t the only wakeup call for the neo-Soviet dictatorship, nor the most humiliating one.

We doubt many will disagree with us if we suggest that one of the weirdest moments in modern Russian history came recently when Russia, after fuming that Ukraine had been stealing its gas and cutting of supplies, suddenly began fuming about the exact opposite, that Ukraine wasn’t receiving as much gas as Russia demanded it should do.  We have a whole category in our sidebar devoted to instances of Russian hypocrisy, many of which defy belief, but this incident was so bizarre that it seemed a whole new vocabulary was needed to describe it.

And now it turns out that even Russia’s crazed dictator Vladimir Putin didn’t believe the things he himself was saying about it.  Putin has gone eyeball to eyeball with Ukraine’s fiery PM Yulia Tymoshenko, and Putin has blinked.

END_OF_DOCUMENT_TOKEN_TO_BE_REPLACED

Last week the world learned that the Kremlin had administered a basic competency test to 250 high-ranking military officers and that one in five of them had failed, resulting in a purge of 50 from the ranks.  It might seem that this represents a gigantic humilation for the Kremlin, but in fact it is merely a ruse designed to cover up an even bigger one.

END_OF_DOCUMENT_TOKEN_TO_BE_REPLACED

Our dear friend and reader “Elmer” points us to the following item from Eternal Remont:

Once upon a time, there was a magical world in which the workers of the world united into a Union of Socialist Republics. It was a myth, because everyone knew that some workers (Russians) were more equal than others.

So what does any of this have to do with tobacco? Well, as part of its negotiations with Bulgaria over the proposed South Stream gas pipeline, Moscow has claimed ownership of Bulgartabac (granted to the USSR as a spoil of war in 1945). Now, Russia wants it back.

“We are set to reclaim all properties that lie abroad and belonged to the Soviet Union. Bulgartabac will not be an exception,” said Vladimir Kozhin, head of the
Presidential Property Management Department of the Russian Federation.

Wait just one second, you say… How can Russia claim Bulgartabac as a property of the Soviet Union, when the Russian SSR was just a single republic within a broader Union of Socialist Republics. Couldn’t the other former SSR’s also claim ownership of Bulgartabac?

Nope. Just Russia, according to Kozhin.

END_OF_DOCUMENT_TOKEN_TO_BE_REPLACED

Act like a Thug in Putin’s Russia, Get Promoted 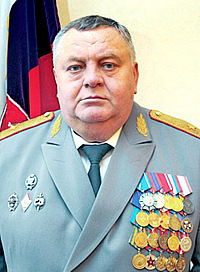 Interior Minister Rashid Nurgaliyev has named a police veteran who two months ago tried to get six students expelled from school for participating in an anti-Kremlin rally as Moscow’s interim police chief.

Alexander Ivanov, 59, a police major general who had worked as former police chief Vladimir Pronin’s first deputy and head of the city’s criminal police department since 2001, will fill the position until a new chief is appointed possibly in late May, police said Wednesday.

President Dmitry Medvedev fired Pronin on Tuesday after a shooting spree in which police Major Denis Yevsyukov, head of a police precinct in southern Moscow, killed three people and wounded six. He was captured after a police shootout early Monday.

Ivanov is a “highly professional” and “experienced” police veteran who “is very familiar with the security situation in the city,” police spokeswoman Zhanna Ozhimina said by telephone.

END_OF_DOCUMENT_TOKEN_TO_BE_REPLACED

For the first time in more than a century, a Moscow-based politician and scholar from the Altai says, Russia’s central government has “cast aside” Siberia, a region that is not only rich in natural resources but whose unique spirit is critical for reform, thus putting the future of Russia as a whole at risk. In an interview in Baikalskiye Vesti yesterday, Vladimir Ryzhkov, currently a professor at Moscow’s Higher School of Economics, says that “Siberia, which for the course of a century was celebrated not only for its natural but its human wealth has been converted into an ever poorer kray, forgotten by God and Moscow.”

END_OF_DOCUMENT_TOKEN_TO_BE_REPLACED

(3)  Exposing the Fraud of Putinomics

(5)  Putin is a Pathetic Loser

NOTE:  Today we deliver a little love letter to Vladimir Putin, dousing him with a tsunami of facts showing how he has failed on every conveivable policy front, from foreign policy to the environment.  The people of Russia have chosen to be governed by proud and totally unqualified KGB spy. This failure is the predictable result of that decision.