EDITORIAL: Russia Through the Looking Glass

Russia Through the Looking Glass 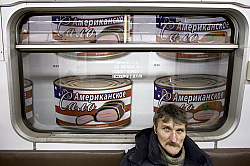 There are times when things happen in Russia that are so bizarrely inane that they defy the comprehension of normal human beings unschooled in the finer points of Russian “thought.” This is one of those instances.

The Moscow Times reports that a  shadowy organization calling itself “Creative Warriors” has installed an ad campaign in the Moscow Metro which, as shown above, depicts cans of “Amerikanskoye Salo” emblazoned with the American flag.  The MT describes “salo” as a ” traditional Ukrainian dish of salted pork fat” and explains that CW’s purpose is to unseat Ukrainian president Viktor Yushchenko by convincing the people of Ukraine that Yushchenko is a puppet of the U.S. and that “American salo is just as impossible as an American Ukraine.”  The group stated:  “We have been created for a new humanitarian mission and that we should spread throughout the entire world. If the campaign is allowed to be fully conducted on a national scale, Yushchenko simply has no chance to win.”

This idea is wrong on so many levels that it’s hard to know where to begin. Only in Russia can a failure be this pathetic, absolute and spectacular.

First and foremost, do you dare imagine dear reader how Russians would react if a traditional Russian food product (but what would that be, exactly? do Russians even have one?) were smeared in the Kiev metro by a Ukrainian who hated Vladimir Putin and wanted the Americans to depose him?  Wouldn’t Russians be likely to be highly offended by such an attempt?  How is it is possible they can dare to do that which they would not tolerate from others?  Did it ever occur to the morons that Ukrainians might dislike Russian foreigners just as much as American foreigners, or even more since Russia has perpetrated a massive genocide against Ukraine followed by decades of brutal imperial domination?  Apparently not.

Second, we don’t like to burst any bubbles of these Russian geniuses, but is the Moscow Metro really the best place to campaign against the President of Ukraine? Wouldn’t such materials be more effective if they were actually seen by Ukrainian voters?  Of course, perhaps when the campaign refer sto a “national scale” it means that the actual purpose of the campaign is to convince Russians to invade Ukraine just as they invaded Georgia and make all the decisions about what happens in Ukraine themselves.  But if that’s the case, aren’t they perhaps being just a bit too subtle? The MT states:  “Political analyst Dmitry Oreshkin said the campaign was organized by a company connected to Russia’s ruling elite, which would like to “divide Ukraine into two parts” and win sympathy among the country’s pro-Russian eastern regions ahead of Ukraine’s 2010 presidential election.”  If indeed this is an open call for Russian imperialism as the only way for the Kremlin to prevail, then it is too repugnant for words.

Third, the movement’s website also states: “Salo is an unofficial symbol of Ukraine all over the world.” Oh really? All over the world? We put it to you, dear reader, that outside of the former USSR nobody has the slightest idea what “salo” is, nor would they care in the least if they did.  This is exactly the kind of crazy, emperor’s-new-clothes remark that used to emanate from the USSR, provoking scorn and ridicule “all over the world.” And now we are seeing it happen all over again, right before our eyes.

Ignorance and hypocrisy and aggression. These are the three deadly vices that brought the USSR to its knees and erased it from the face of the globe.  How can Russians expect any other fate for their nation if they repeat them?

11 responses to “EDITORIAL: Russia Through the Looking Glass”