(3)  One “Raped” Investor gets Wise to Russia

On January 23rd the Human Rights watch released a 200-page report entitled  “Up in Flames: Humanitarian Law Violations in the Conflict Over South Ossetia.”   Based “on more than 460 interviews done over several months of field research” the report “details indiscriminate and disproportionate attacks by both Georgian and Russian forces, and the South Ossetian forces’ campaign of deliberate and systematic destruction of certain ethnic Georgian villages in South Ossetia. It also describes Russia’s failure to ensure public order and safety in areas of Georgia that were under its effective control.”

Russia and Georgia had opposite reactions to [the] report. Moscow said it was “based on a series of shopworn and baseless theses actively discussed in foreign political and media circles.” Tbilisi called it “an objective and thorough picture.” Russia’s Ministry of Foreign Affairs said Human Rights Watch, based in New York, had said “practically nothing about the colossal damage” to South Ossetia “as the result of Georgian aggression.” Georgia said the report “unambiguously places responsibility on the occupation forces of the Russian Federation and its proxy regime for ethnic cleansing and war crimes.”

In other words, once again Russia has suffered a crushing defeat in the PR campaign over the war in Georgia and been exposed as the wanton aggressor.   When a study finds that Russia is in the wrong, that study is “shopworn and baseless.” But if the study had found Russia was 100% in the right, the Kremlin would have praised it to the sky.  Welcome to the through-the-looking-glass world of Vladimir Putin’s Russia.

END_OF_DOCUMENT_TOKEN_TO_BE_REPLACED

David Denby, the New Yorker‘s movie critic, says that not only should the movie Slumdog Millionaire not win this year’s Academy Award for best film, it did not even deserve to be nominated.

Denby is, of course, one of the world’s great pompous irrelevancies, and apparently moron to boot.  After all, not too many people take their movie-going advice from the New Yorker, and for good reason.  This dolt hasn’t got the first clue what he’s talking about.

END_OF_DOCUMENT_TOKEN_TO_BE_REPLACED

One “Raped” Investor gets Wise to Russia

Writing on Seeking Alpha, in a column entitled “From Russia with Bitterness,” international investor Eric Roseman sees the light (the Motley Fool has similar sentiments):

One of my biggest mistakes a few years ago was placing a bet on one of Russia’s largest oil companies. In hindsight, despite the incredible value still offered by this investment, I’ve lost more than 50% of my capital…and not strictly because of plunging oil prices.

Russia is not governed by market capitalism. The market has evolved into a twisted version of despot capitalism whereby Vladimir Putin sets the tone for the market, deciding which companies should be nationalized (a.k.a. victimized), purged, and eventually placed under full or partial state control. The government typically targets natural resource companies for this exercise and doesn’t care if foreign investors get caught in the middle of this confusing web of intervention.

END_OF_DOCUMENT_TOKEN_TO_BE_REPLACED

Let's be clear: The Russian Orthodox Church put Nevsky on an icon because it declared him a saint

The Ukrainian web publication The Day offers insights on the real “Saint” Alexander Nevsky (FYI, dear reader, Vladimir Putin may also be on the “Saint” track):

On the Sunday evening of December 28, 2008, Russia TV channel announced live the personality chosen as symbol of the nation. In a three-month-long nationwide Internet and SMS vote, the public chose the Ancient Rus Prince Alexander Nevsky. Out of the total 4.5 million Russians who voted, over 520,000 preferred this figure. The second best was Pyotr Stolypin, architect of the farming reform and Russia’s prime minister in the early 20th century. Coming off third was Joseph Stalin, followed by Aleksandr Pushkin, Peter I, Vladimir Lenin, Fyodor Dostoevsky, Aleksandr Suvorov, Dmitry Mendeleyev, Ivan IV the Terrible, Catherine II, and Alexander II. The voting could not avoid scandals. For example, it was Stalin who was leading at first, then Alexander Nevsky outran him by a mere 2 percent.

Nevsky and Stalin are equally odious personalities who are still stirring up controversy and disputes about their role in Russian history. But while the life story of Alexander Nevsky is covered with centuries-old dust of history and ordinary Russians get information on him mostly from school manuals, Stalin’s “deeds” still remain in the memory of a considerable part of the Russians. The fact that Stalin, a cruel tyrant who wiped out tens of millions of innocent people, almost became the symbol of Russia arouses great alarm and preoccupation over the Russian nation’s ethnic health, for a great-power psychosis is clearly being instilled again.

END_OF_DOCUMENT_TOKEN_TO_BE_REPLACED

Vladimir Ryzhkov, writing in the Moscow Times, brings back memories of the good old days when the mighty MT was not afraid to speak truth to power:

President Dmitry Medvedev attracted a lot of attention when he met on Thursday at the Kremlin with Dmitry Muratov, the editor-in-chief of Novaya Gazeta, the newspaper renowned for its brave investigative journalism and harsh criticism of the Kremlin. At the meeting, Medvedev reportedly expressed his “deepest sorrow and compassion” over the death of Anastasia Baburova, a freelance reporter for Novaya Gazeta. Baburova and human rights lawyer Stanislav Markelov were killed in an apparent contract killing on Jan. 19 in the center of Moscow.

Many viewed Medvedev’s gesture as further proof of his “liberalism” — a counterbalance to the autocratic Prime Minister Vladimir Putin, who was criticized for his cold-hearted reaction to the 2006 killing of Anna Politkovskaya, also a reporter for Novaya Gazeta.

But to get the real picture of who Medvedev is, the believers in his liberalism should look past his superficial photo ops and meaningless statements. Take, for example, a bill Medvedev sent to the State Duma last week. When signed into law, it will allow Kremlin-friendly regional legislatures to remove opposition mayors who were elected by popular vote.

END_OF_DOCUMENT_TOKEN_TO_BE_REPLACED 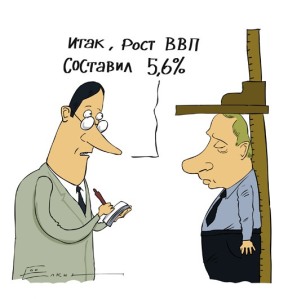 This is an interesting cartoon from the pen of Ellustrator Sergei Yelkin, whose work we have not featured in some time now for lack of space due to all the horror unfolding in Putin’s Russia these days.  It points out the interesting fact that Putin’s initials “V.V.P.” for Vladimir Vladimirovich Putin are the same as those of the Russian translation of Gross Domestic Product (“Valovoj Vnutrennij Produkt“), as if the president of the United States were Named George David Pensky for instance.  The man says to Putin:  “So, the growth of VVP has increased 5.6%.”

If to judge from this cheesecake photograph, there was a time early in Maria Sharapova’s career when she felt she needed something to fall back on in the event her tennis career didn’t work out, and that thing, she decided, should be streetwalking.  Say what you like about her tennis skills, she’s a great little piece of ass, isn’t she?

Sharapova may have shown considerable prescience.  Last week she dropped out of the top 10 in the tennis rankings, falling 8 places from #9 to a lowly #17 as 10-time grand slam champion American Serena Williams took over the #1 spot for the third time in her career.  Williams now holds more grand slam titles all by herself than all Russian citizens who have ever played the game in its entire history, male and female, combined.

We continue to see Shamapova (as we like to call her) as a perfect microcosm of Russia itself, elevating form over substance and confusing luck with skill to create a ridiculous amount of hype totally inconsistent with reality.  Sharapova  hasn’t won a tennis tournament since she lucked out to face an unseeded Slovakian player not ranked in the world’s top 30 in the finals of the Tier II event at Amelia Island in April 2008, nearly one year ago.  Throughout that tournament, Sharapova never had to face a player ranked in the world’s top 20.  In the past year she’s recorded exactly one match victory over a top-ten opponent.