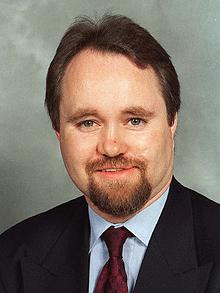 It’s somewhat difficult to imagine what sort of person could be an organizer, MP and energy minister for the British Labor Party for more than a decade and then, when finally rejected at the polls by his own constituents, accept a knighthood from the Queen and enter the House of Lords, thus becoming the very personification of all that he had heretofore been opposing.

But you don’t have to imagine it, you can just look at the photograph of Baron Peter Derek Truscott and see it all in living color.

And you can then open your virtual copy of the Times of London and regale yourself with his exploits having “risen” to the status of Peer of the Realm, and the Daily Mail‘s revolting picture of his secret Soviet past. The Times has discovered that any number of lords have been selling themselves to the highest bidder and that “Lord Truscott, one of those named in the lords for hire scandal, met the energy minister, allegedly without declaring that he was being paid by a lobbying firm that had among its clients Russia’s state-owned gas giant Gazprom.”

And so, of course, it all comes back to Russia.

Truscott is on tape “telling undercover reporters posing as lobbyists that they could assist them in changing a law” and “discussed fees of between £24,000 and £120,000.” The Times reports:  “Truscott, 49, has a Russian wife, Svetlana, and has written three books on the country, including a biography of Putin, the prime minister, which was well received in Moscow.” It continues:

On Friday The Sunday Times sent dossiers of transcripts and tape recordings to the Lords authorities and to Scotland Yard, who had both requested our evidence. During the undercover investigation, Truscott, the energy minister until 2007, said he had recently been talking to Gazprom about issues of interest to the firm. The Russian state-owned gas company is hoping to become a main player in the UK gas market. He said that his contact with the gas company was through Gavin Anderson, a public affairs company which has been paying him as an adviser since November 2007. “One of the companies I advise, advises Gazprom. I don’t advise Gazprom directly,” he said. It has now emerged that in February 2008 Truscott had lunch with Malcolm Wicks, his successor as energy minister, and, according to a source, did not mention his link to Gazprom. Wicks said: “We had lunch and chatted about all sorts of things, mainly as I recall about Russia which Peter [Truscott] has a strong interest in. We talked about energy policy . . . we talked about where we’re going to get our gas in Europe and Russia crops up, of course it does.” The source said Wicks was “amazed” later to discover the Gazprom connection. “Gazprom is no ordinary gas company, it’s crucial to the Russian economy and everyone knows how close it is to Putin and the state,” the source said.

Truscott “told the undercover reporters that he had just had lunch with a Gazprom executive and had given the company’s delegates a guided tour of parliament. ”  He was recorded admitting: “When I was energy minister they [the government] were very wary about letting Gazprom in and there were other issues, security issues as well, some of which is secret.”

Yet, he moved ahead. He stated: “Now it’s still very sensitive. The UK arm of Gazprom is gradually expanding in the UK and expanding in the retail sector. The big issue a couple of years ago was Gazprom buying Centrica. That was a security issue. So these are the sorts of things I advise them on as well.”

Baron Truscott may well be on his way to prison for life as a traitor not only to his country but to all of mankind.

5 responses to “EDITORIAL: The New Chamberlain”