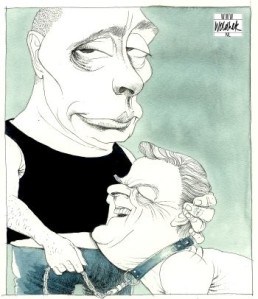 Two very disturbing recent news reports point to a bizarre anschluss (the German word for “link up effort,” which is used to describe the unification between Austrian and German Nazis in the prelude to World War II) between various fringe groups in Germany and the neo-Soviet regime of Vladimir Putin.

First, writing on the Jamestown Foundation’s Eurasia Daily Monitor, the ever-brilliant Vladmir Socor describes an “open letter” to Barack Obama from German Minister of Foreign Affairs Frank-Walter Steinmeier which uses a “pathos-filled style echoing the globalist and pacifist yearnings of German Leftist circles” and seeking to bring Obama over to the cause. Socor notes that “Former Minister of Foreign Affairs Joschka Fischer of the Greens published an article in a similar spirit on January 11 in several German and other European newspapers.”  It advises Obama to trust and accept Russian “President” Dima Medvedev’s ideas about “new security architecture” in Europe and makes no mention of the threat posed by Russia to the present architecture.

Then, writing on Robert Amsterdam’s blog, hero journalist Grigori Pasko regales readers with a recent award Germans chose to bestow upon Vladmir Putin, a man who previously spied on their country for the USSR.

On 16 January, prime-minister of the RF Vladimir Putin in Dresden in a solemn atmosphere received the “Saxon order of gratitude” of the Dresden Semperoper in the nomination of a “Politician”. The order represents a figure of Saint George mounted on a horse, striking with a lance a dragon personifying evil. It is fabricated in the Dresden jewellers’ workshop as a precise copy of one of the most precious masterpieces of the “Grüne Gewölbe” museum – a statuette of Saint George – against the background of a panel with the motto “Adverso Flumine” (“Against the flow”). In the number of former laureates of this order – actor Maximilian Schell, footballer Franz Beckenbauer and ex-minister of foreign affairs of Germany Hans-Dietrich Genscher.

Officially it was announced that they had conferred the cute little order on Putin for his supposedly existing merits with respect to the return of the so-called “trophy art” to Dresden. I am confident that few among the Dresdenites will be able to recall what specifically this Putin did in relation to this. The question begs itself: could it be that Vladimir Vladimirovich himself through his German friends had organized yet more PR for himself? After all, everybody knows that television is what made Putin, and now he, like some hard-core drug addict, can’t go anywhere without it.

And let’s not forget the ongoing venal activities of former German Chancellor Gerhard Schroeder, who basically sold himself to the Kremlin for use as a propaganda weapon.

All told,  this is some sick, sick stuff — we probably don’t need to point out the obvious fact that the last thing the West needs right now is trouble from the Germans,  nor do we need to remind anyone that it’s not necessarily coming from mainstream Germans.  On the other hand, there was a time when Hitler wasn’t mainstream, either.

The people of Germany need to get their act together.  They have much to atone for, and they can begin to do so be assuming a leadership role in standing up to the threat of neo-Soviet Russia.  The German Chancellor had made important steps in that regard, for instance flying to the side of the besieged president of Georgia and lobbying Russia on his behalf.  But Germans could be much more vocal in supporting the American defensive missle system in Eastern Europe, and they should be giving far more support than they are to Russia’s embattled human rights community.  Germans cannot afford to have it said that they did less than they could have to resist the creation fo a new GULAG archipelago in Russia.

We call upon the people of Germany to answer the challenge put to them by this gaggle of freaks and weirdos within their own society by providing at least the same level of support to those in Russia who support democracy and oppose the neo-Soviet rule of Putin’s KGB clan.

14 responses to “EDITORIAL: A Neo-Soviet Anschluss?”