Another Original LR Translation: The Perils of Svetlana Bakhmina 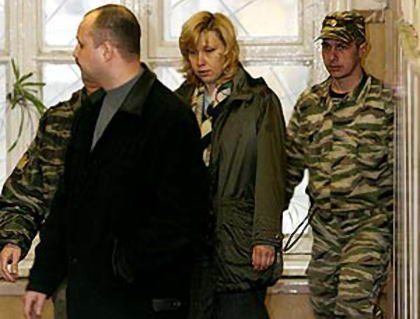 A note from the translator: Yuliya Latynina is a great columnist with the requisite gifts of perception and clear-sightedness and the ability to write straightforwardly. This is very noticeable when one translates things. Some texts just flow from the Russian through the keyboard into English, others are a struggle. Milov, for example, is much harder to translate than Yuliya. It’s not a matter of subjects, it’s a matter of good thinking and expression. I see it the other way round too — I can read a free translation of an Economist article out loud to my wife [the Economist has strict style standards] but pieces from other journals are always harder. Translateability, therefore, can be a measure of the excellence of the author. Yuliya ranks high.

A note from the editor:  You can sign a petition to call for Bakhmina’s freedom here. A second piece about Bakhmina’s plight from the same Russian source follows Latynina’s.

First she did not Apply
and Secondly she Withdrew the Application

Cops flag down a black Mercedes on Kutuzovsky Prospekt. They find a body with a bullet in its head in the trunk. “What’s all this, then?’ they ask. “Well, our friend here committed suicide and we’re on our way to bury him,” answers the driver. “And why’s he got a soldering iron up his rectum?” “Oh, that was the deceased’s last wish.”

I was reminded of this wonderful anekdot [TN: the Russian анекдот is so special it does not deserve to be translated by the word ‘joke’] when I saw the Kremlin’s reaction to Svetlana Bakhmina’s request for release on parole. The Kremlin said she had made no such application. The camp authorities said she had withdrawn her application. As for Bakhmina herself, not even her lawyers are able to get in touch with here – she’s been hidden away in hospital.

Isn’t that just typical of those liberal swine: they raise Cain in support of Bakhmina but she never even asked for parole and in any case has rescinded her request!

The liberals are always trying to wrongfoot the authorities. You saw the official announcement that Magomed Yevloyev died as the result of an accident. He was dragged off his plane by order of President Zyazikov, shoved into a car, and a minute later got shot in the head. Unfortunate accident. Clear as day, surely?

You saw the official announcement – Berezovsky poisoned Politkovskaya. He hired FSB agent Movladi Atlangeriyev, who passed the order on to FSB agent Lom-Ali Gaitukayev, who tasked FSB Lt. Col. Pavel Ryaguzev with the job and also arranged two surveillances on her, one by the FSB. All Berezovsky’s doing. Clear as day, surely?

And Gogol’s Under-Officer’s widow. She brought it on herself, it’s well known. Soldier Sychev’s legs came off by themselves [TN: recent victim of dedovshchina, violent hazing, whose legs had to be amputated as a result of injuries received]. And the thousands – sorry, hundreds – of Chechens who disappeared without trace after people in uniform came for them? They ran away.

Svetlana Bakhmina with her two children, in happier times

The Kremlin’s reaction to Bakhmina’s parole request shows that the Kremlin has nothing to say. If one stops to think about it, what can young, successful, flourishing young president Medvedev say? That yes, it is in his power to pardon a pregnant woman? Just think of the consequences if he should do so! People will start saying that he’s capable of making decisions. What a nasty trap those dreadful liberals have set for their president! If he pardons her, the word may may get about that he actually is the president.

However, before the heavyweight douchebags get going, it’s still just itsy-bitsy internet ones, who by the way wrote in en masse to my Ekho Moskvy programme with questions designed to show that there is active popular outrage at the thought of a pardon for Bakhmina. “Why are you raising an hue and a cry about pardoning her?”, they wrote. ‘Tell the public honestly about what Bakhmina is guilty of and let them decide what she deserves.”

Do you know what? I’m not going to discuss Bakhmina’s guilt. Jews were incinerated at Auschwitz. I say that was evil. You may ask on what grounds do I state that and demand that a legal case be made, that instead of wildly condemning the concentration camp administration, I should make a concrete case for each concrete Jew, discover what he was arrested and put to death for and then put this material before the public for them to decide if this particular person was lawfully or unlawfully killed.

Anyone who wants to do things this way can go to the State Procurature’s website and read for himself that Bakhmina is in jail for stealing practically the whole of Yukos. Although any fool can work out for himself that she couldn’t have done it, nor could her boss Golobolov, nor probably her boss’s boss Khodorkovsky himself.

If employees are to be jailed for what their bosses do, that means that they are actually be jailed for not turning their bosses in. People who put the mother of two children in jail for not denouncing Khodorkovsky are just SS men. And anyone who waves the flag for them is nothing but a louse.

Other internet douchebags wrote to ask: “Why Bakhmina? You journalists just look after your own. Why support her and not someone from the common folk?”

We do, we do. And each time that the fate of one particular person because a symbol of the monstrosity of the system, each and every time, up pop accusers, foaming at the mouth. When people came to the defence of soldier Sychev, up cropped dozens – no, hundreds – of generals ready to swear blind that Sychev’s legs came off of themselves. When people defended Svetlana Beridze, run over and killed by Aleksandr Ivanov, son of the minister of defence, the whole system got itself in gear to defend him. When asked who killed Magomed Yevloyev, the whole system gears itself up to defend the right of Ibragim Yevloyev [TN: no relation] and Musa Medov, chief of security of the interior minister of Ingushetya to put a bullet in his head.

Each time the Kremlin gets itself into a sticky mess, up they come with the question “And why don’t you say anything about the terrible things the Americans are doing in Iraq?”.

And that’s that, officer.

A note from the translator:  Here is another take on Russian society, viewed through the Bakhmina issue. No Yuliya Latynina logic here, more a cry of the Russian душа (soul). Sadly, she’s right: Russian society passes her “swine test” all right.

Over 74 thousand people have now signed the letter asking the Russian president to use his right to pardon and set Svetlana Bakhmina free. I’m sorry to say that I do not think the number of signatures will affect the result any way. I also think that Bakhmina may even be released. That would be nice. But I can’t escape the feeling that an experiment is being carried out on Russian society. A sort of test for human feelings.

Do you feel sorry for a young woman, mother of two children and pregnant with a third, convicted of “economic crimes” and not crimes against the person or humanity? In principle, you do. But when it’s Svetlana Bakhmina, you don’t.

Do you feel sorry for a very sick man who is involved in the case against a certain company and who is racked with pain day in and day out? Theoretically – yes, But in real life this person is called Vasili Aleksanyan. And a nasty little demagogic dance starts up in your head: why should we feel sorry for this particular mother of two and this particular sick man?

Don’t ask the question, people: feel sorry! Or don’t. Actually, you don’t really. It makes my stomach churn to listen to the arguments of those who prefer not to feel sorry for particular individuals. I don’t want to go into everything that preceded this dilemma of whether to feel sorry or not. By law, Svetlana Bakhmina has the right to parole. Furthermore, the fact that she was given a leave of absence from her prison camp proves that she must have behaved in an exemplary fashion and also that it was permitted from on high. You don’t think that the camp boss let her out on his own discretion? That makes me begin to think that yes, there is a chance she will be pardoned. But what about the public? The public, brains pumped full of Channel 1, is perhaps incapable of comprehending that a “heads up!” has been called. Now that we’ve heard more about it, why pardon her? She worked for Yukos? She robbed the country? Let her stew. There’s plenty of mothers doing time! Let her do hers!

The trouble is that all these yes-buts about others in jail means just one thing: no one is concerned about anyone’s fate. And that’s just what they wanted. To create a society in which its members are indifferent to each other. It’s only when people are indifferent that they can act without regard to consequences.

I’m not talking conspiracy theory here. These “couldn’t care” attitudes were not artificially implanted. They simply burst into flower, nurtured by the ‘power vertical’ and the information vacuum. Just one (!!!) year after the Beslan tragedy, the Moscow mayor’s office refused to cancel a public celebration on that day. Why recall events that would lead any reasonable thinking person to have a load of questions? Innumerable other examples exist. Furthermore, the actual possibility of expressing one’s civic position today depends entirely on the inclinations of the regional authorities where one is as they can approve or ban any public demonstration about anything. There does remain the internet, although it does not have the penetration it does in other countries. A couple of days ago, some well-known artists telephoned me, having heard rumours that there was a letter in support of Bakhmina that could be signed, hoping to find out more since they had no idea what to do next.

74 thousand signatures in a country of 140 million? Not a lot. Do you still want an explanation as to why Bakhmina should be paroled? Just because. Because one must be kind. No one can force you to be that. And it’s not that lack-of / cost-of housing problem that has curdled the Muscovites, they went rotten all on their own. Poison, give me poison, the classic line goes through my head. And I don’t care if this internet plea gets read or not by our country’s First Person. He’ll make his decision based on other grounds. Mercy is not a word in his vocabulary and God will be his judge.

The problem lies elsewhere, with us. You’re already in the early stages of defectiveness if you’ve lost your inclination to call for mercy on others. The doors of the cattle-class train are opening for you. You’ve passed your ‘swine test’.

The androids on top of us don’t need to worry. Our society is living up to them.

7 responses to “Another Original LR Translation: The Perils of Svetlana Bakhmina”