(3)  EDITORIAL:  Another Young Russian into an Early Grave

(4)  Once Again, no Nobel Prizes for Russia

(7)  Unemployment on the Rise in Putin’s Russia

Our sidebar carries a banner inviting readers to sign a petition to divest Russia of the 2014 Olympic games, which it proposes to hold in Sochi.  Even before the Georgia invasion, the reasons for doing so were obvious:  There is horrific danger posed to the athletes, both from terrorism in the region and from the everyday risks of Russian society (Russia is among the most dangerous places in the world in terms of murder, fire fatality and airline fatalities). There is the tacit recognition of the KGB regime of Vladimir Putin, which has brutally repressed every aspect of civil society. And there is the abhorrent misallocation of resources in a country where the average male doesn’t live to see his sixtieth year.  Add Russia’s barbaric behavior in Georgia, condemned by the entire civilized world, and the question of whether Russia should be rewarded by being allowed to host the games is a absolute no-brainer.

But in truth, just as was the case in the Cold War, it really isn’t that necessary to take action against Russia — since in all probability Russians will simply destroy themselves if left to their own devices.  Events last week made this particularly plain.

END_OF_DOCUMENT_TOKEN_TO_BE_REPLACED 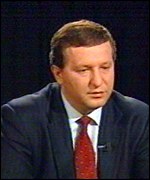 Time for another readalong, where we take you on a pulse-pounding line-by-line journey through the twisted mind of a Russophile psychopath.  This time its Alfred Kokh, former deputy prime minister under Boris Yeltsin and the author of the upcoming book A Crate of Vodka: An Insider View On The 20 Years That Shaped Modern Russia, writing in the Christian Science Monitor. His words verbatim in ordinary print, our commentary following in boldface.

It’s a truism that stable and friendly relations between two countries require each to look at a situation from the other’s point of view. The recent tussle between Russia and the West over Georgia is a stark reminder of how the United States has fundamentally never understood Russia’s point of view. The conventional view is that Russia in recent years has been pushing away from the West. But the reverse is more accurate. The Russia-Georgia conflict is a consequence of the West’s “pushing away” of Russia.

He’s right, of course, about it being necessary “to look at a situation from the other’s point of view.” But what he fails to acknowledge is that nobodyin mainstream Russian media is allowed to look at anything from America’s point of view. America routinely publishes the drivel of lunatics like this, but there is zero reciprocity in Russia.  Just this past week, we reported on how Professor Boris Sokolov was fired for daring to raise America’s viewpoints on the Georgia crisis.  To suggest that America can make better relations with Russia by one-sidedly considering Russian interests is such nonsense that it could only come from one of Boris Yeltsin’s flunkies.  Let’s not forget that Yeltsin is utterly despised by the people of Russia and personally responsible for putting Vladimir Putin in power. The West is “pushing away” Russia in exactly the same way Russia “pushed away” Nazi Germany. Was that a bad thing? Is this ape suggesting Russia should have done more to “understand” Nazi motivations?  Those with weak stomachs, turn away now. It gets much, much worse as it goes on. You have been warned.

END_OF_DOCUMENT_TOKEN_TO_BE_REPLACED

EDITORIAL: Another Young Russian into an Early Grave

Another Young Russian into an Early Grave 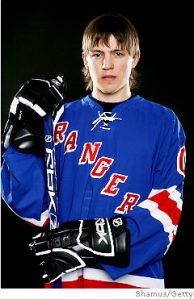 Though Russians are wont to complain about “evil foreigners” encircling Russia with malicious intent, anyone even casually familiar with the country knows only too well that the greatest danger to a Russian citizen is . . . another Russian.

The horrific most recent case in point was 19-year-old hockey player Alexei Cherepanov, who collapsed on the ice earlier this week in a manner eerily similar to figure skater Sergei Grinkov several years ago.

And it was all so unnecessary.  Once again, total Russian incompentence combined with total Russian disregard for the value of individual human life was exposed in the most horrific manner possible. Russia’s hockey establishment, in short, is every bit as corrupt as Russian society generally.

Not only did Russian sports authorities fail to diagnose the young prodigy’s ischemic heart disease, which caused him to collapse during a game in Moscow (he was preparing to enter the NHL next year), but it also failed to have an ambulance on site during the game. By the time one finally responded, nearly an hour after the incident, it was far too late. Furious onlookers are reported to have assaulted the ambulance crew when it finally showed up.

Reader “Oleg” sums it up by e-mail:

END_OF_DOCUMENT_TOKEN_TO_BE_REPLACED

Once Again, a Goose Egg at the Nobels for Russia

This year 12 individuals received Nobel Prizes in six disciplines. Once again, America led the way with five prizes (Economics, Chemistry and Physics), nearly half the total.  France had three, Japan had two and Finland and Germany had one each. It’s enough to make one wonder where the outside world gets the crazy idea that America is in decline.

A Russian hasn’t won a Nobel Prize of any kind since 2003 when Vitaly Ginzberg got one for Physics.  But ask any Russian:  someone with a Jewish surname isn’t “really” Russian as far as they’re concerned, and he shared it with two American colleagues.  A “Russian” hasn’t won for literature, the single sphere of human activity for which the country is most renown, since 1987 — and that was Josef Brodsky, who had already defected to the United States.  Russia hasn’t won for chemistry since 1977.

Russia has won 22 Nobel Prizes (including expats) since the award was created.  Germany has 100.  The United States has 300. None of this is surprising, since Russia has chosen to divert the vast majority of its resources towards nationalistic pursuits like the cold war, including ridiculous charades of no value to the nation like the Sochi olympiad, rather than scientific advancement in the service of the people of Russia.

You already know that even in boom times Russia’s airlines were the world’s most dangerous to fly on (see our “air disasters” tag in the sidebar to read all about  it).  How do you think that situation will change now that the airlines are strapped for cash?  The Moscow Times reports:

Aeroflot said Tuesday that profits dropped 55 percent in the first half after prices for jet fuel surged and warned that full-year earnings might be little more than one-quarter of those of 2007.

Net income at the country’s largest airliner fell to $72.2 million from $160.8 million a year earlier. Revenue advanced 28 percent to $2.14 billion as passenger numbers increased 20 percent to 5.4 million, the company said in a statement. Earnings before interest, taxation, depreciation and amortization fell by 34 percent to $216 million. Aeroflot’s fuel expenses jumped 64 percent to $731 million in the half, with operating costs increasing 42 percent to $2 billion. Fuel prices in the country rose 70 percent from November to June, prompting the Federal Anti-Monopoly Service to open price-fixing cases against the five largest oil companies.

“I expected even worse results as high fuel prices have sharply cut profit margins of Russian airlines,” said Alexander Ignatyuk, an analyst at brokerage EnergoCapital. “Aeroflot will only turn the corner when it overhauls its fleet and acquires more fuel-efficient planes, which is still two or three years away.”

The carrier’s shares rose 1 percent on the MICEX, lagging the MICEX Index’s gains of more than 13 percent.

END_OF_DOCUMENT_TOKEN_TO_BE_REPLACED 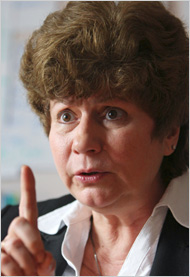 We are heartened to see the mainstream media pick up the story we blogged about earlier in the week, via the always-brilliant Paul Goble, regarding the Kremlin’s latest horrific physical assault on its critics. The New York Times reports:

French police are investigating the discovery of toxic mercury pellets in the car of a human rights lawyer who was taken ill in Strasbourg on Tuesday, a day before pretrial hearings in Moscow into the killing of one of her best-known clients, the journalist and Kremlin critic Anna Politkovskaya.

The case recalled events almost two years ago when Alexander Litvinenko, a former K.G.B. officer and a vocal critic of Vladimir V. Putin, died after ingesting a highly radioactive toxin, polonium 210. Scotland Yard said he had been murdered.

Ms. Politkovskaya, who had chronicled allegations of abuse in Russia’s wars in Chechnya, was shot to death in her apartment in Moscow a few weeks before Mr. Litvinenko was poisoned. Critics of Mr. Putin, then president and now prime minister, said the two killings were part of a pattern of Kremlin-backed actions against its foes.

END_OF_DOCUMENT_TOKEN_TO_BE_REPLACED

Unemployment on the Rise in Putin’s Russia

The Moscow Times reports that Vladimir Putin’s Russia Russia is, amazing, facing both massive unemployment and staffing shortfulls at one in the same time:

Massive layoffs have not started, but companies and employees are preparing themselves for the possible consequences of the financial crisis and a slowdown in growth across most sectors. The white-collar labor market, which only a month ago faced a strong undersupply of qualified staff, making it possible for candidates to demand high salaries and compensation packages, is now turning in the other direction. As most Russian companies stop gearing for continuing growth, fewer new jobs are available, and existing jobs are becoming more valuable. “Now it’s a more favorable market for employers, and the companies that will receive the most benefits will be the Russian companies,” said Tremayne Elson, managing director at Antal, a recruitment agency. “They’ll be able to get a better selection of people, for cheaper.”