This is the fifth installment in our series of special posts supporting the candidacy of John McCain, whom we have endorsed to be the best choice in the upcoming U.S. election. Search “campaign blitz” in our sidebar engine to read the prior entries.

Since World War II, the Democratic Party has evinced a remarkably consistent record of total failure in presidential politics.  Republicans must be quite sanguine in the knowledge that even if they lose it will not be long before the Democrats destroy themselves, and indeed many might feel it would be better to lose the upcoming presidential election than to win it.

After World War II, first came John Kennedy, who did not even manage to survive one full term as president.

Next was Lyndon Johnson, who botched his first elected term so badly that his own party repudiated him for a second term (and who only managed to get into the Oval Office in the first place because of vice-presidential succession).

Then there was Jimmy Carter, the only Democrat since World War II to first attain the presidency by winning an election with a majority of the popular vote.  He too was a one-term wonder, his presidency leading to disastrous failure and humiliation for the United States on both foreign and domestic fronts and a brutal whalloping at the hands of Ronald Reagan.

Finally, we had Bill Clinton, the only Democrat since world War II to win two elected terms as president.  Yet, in neither of Clinton’s “victories” did he get a majority of the popular vote, he faced impeachment, and both houses of Congress fell into Republican hands for the first time in half a century. What Democrat major initiative did Clinton shepherd into policy? Hard to think of one, isn’t it? He’s famous for balancing the budget, abolish welfare and championing free trade.  Those are Republican initiatives.

The contrast between these Democrats and the Republicans could not be more stark.  Dwight Eisenhower, Ronald Reagan and George W. Bush all were reelected to second terms with majorities of the popular vote.  The party faced only two major defeats when Gerald Ford and George H. W. Bush were beaten for reelection, but they wrecked havoc on the Democrat presidencies that followed, regrouped and came back to power stronger than ever before.

And in fact, it can easily be argued that the Republicans were lucky not to win the presidency in 1964 or in 1976.  Had they done so, they would have faced the full-blown Vietnam crisis that destroyed LBJ’s presidency and the economic “malaise” (with long lines at the pump) and the Iran hostage crisis that crushed Jimmy Carter.  Had the Republicans won in those years, their presidencies might well have been followed by eight-year mandates to the Democrats, and American history could be entirely different.

There are remarkable parallels between the candidacy of Democrat Barack Obama and that of Jimmy Carter.  Both men, if Obama wins, will have entered office solely because of crisis events late in the second terms of Republican predecessors — not, in other words, because the public was embracing the Democratic Party based on its principles and ideas.  Obama faces the possibility of a major economic downturn during his administration, for which he is just as ill-equipped and unqualified as was Jimmy Carter, and for which he will surely get the blame.  It’s just as forseeable that a military confrontatio like the Iran crisis could develop in Obama’s administration as well.  And unlike Carter, Obama is dogged by serious allegations of personal corruption and radicalism, which could prove to polarize the entire country against him should he attempt to actually govern according to the goals of the Democratic Party.

In other words, people are voting for Barack Obama not because he is Barack Obama, but because he is the antithesis of George W. Bush — exactly the same manner that they voted for Jimmy Carter because he was the polar opposite of Richard Nixon.  That is simply not a basis for government and the achievement of partisan political goals. It is, instead, a recipe for disaster.

The chart below shows this reality vividly. 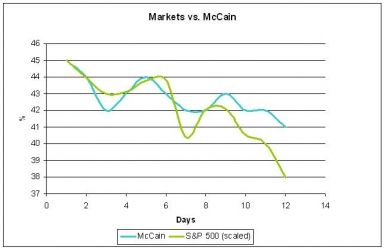 McCain and the Market

There is an irrational correlation of 0.77 between the fall of the S&P index and the fall of John McCain’s poll numbers.  McCain had no more to do with managing the economy than Obama, both are Senators. McCain is often a harsh critic of George Bush.  Obama has no credentials whatsoever showing an ability to manage an economy.  But the public is lashing out against the party that currently holds the White House, just as it did in

This entry was posted in russia. Bookmark the permalink.