(1)  EDITORIAL:  The Stalinification of Russia

(5)  Annals of the Russian Fix

NOTE: Reader “Oleg” has provided us with a copy of a scholarly report from the Central Asia Caucasus Institute entitled “Russia’s War in Georgia” which reviews the evidence showing that Russia prepared for and instigated the conflict. We have uploaded the report to the Internet. You can view it here.

EDITORIAL: The Stalinification of Russia

Russia has taken another giant step towards Stalinification.

The Moscow Times reported last Wednesday that the Kremlin plans to set up an entirely separate law enforcement body devoted to fighting “extremism” — and by that term, the Kremlin means those who disagree with it in any manner.  Deputy Prosecutor General Viktor Grin  told the Duma that current enforecement was “ineffective” and specfically stated that “Internet and computer games are being used to promote terrorism and hate crimes. The Internet offers instructions on making explosives and blowing up buildings, while popular computer games promote racially motivated violence.” So-called “President” Dmitry Medvedev backed him up, telling Interior Ministry officials in the Kremlin on Tuesday that they must “step up the fight against extremism and ultranationalism.”

That’s all code for a major new crackdown on civil society on the Internet, its last remaining bastion, prestaged by the recent prosecutions of bloggers who dare to criticize the Kremlin. Galina Kozhevnikova, deputy head of the Sova Center, which tracks hate crimes, told the MT that she feared that the proposed agency would be “directed toward the political opposition” and be “a corruption machine.”  To the Kremlin, Garry Kasparov is an extremist, and they jailed him. Same for Oleg Kozlovsky and a host of others who have been written about on this blog. In fact, anyone is an extremist who disagrees with the Kremlin.  Just try to find one single person who expresses fundamental disgreement with the Kremlin and is treated with respect by it.

END_OF_DOCUMENT_TOKEN_TO_BE_REPLACED

Dmitry Shlapentokh, an associate professor of history at Indiana University, writing in the Moscow Times:

Second honeymoons rarely, if ever, recapture the zest of lost love. Yet ever since the Soviet Union’s collapse in 1991, Russia and China have sought to rekindle the close relations that once supposedly existed between the two countries before Nikita Khrushchev’s denunciation of Stalin in 1956. But the renewed China-Russian marriage always smacked more of convenience — aimed as it was at checking U.S. hegemony –than of true romance. Now Russia’s invasion of Georgia has shattered even the illusion of attraction.

In 1969, the Chinese and Soviet armies exchanged fire across their disputed border. Recently, the two countries signed an agreement that seemed to put an end to their long border dispute. The agreement was a sort of follow-up to the visit to Beijing of President Dmitry Medvedev, who made China one of his first official trips abroad after being elected president.

During Vladimir Putin’s presidency, Chinese and Russian troops engaged in joint military maneuvers, and the two countries became dominant powers in the Shanghai Cooperation Organization, or SCO, which, to some Western observers, looked like an effort to counterbalance NATO. There were also years of “Russia in China” and “China in Russia” cultural exchanges, meant to underscore that the two countries were tied together not just by geopolitical pragmatism, but by genuine cultural and historical ties as well.

But the fact is that 17 years of high-level bilateral cooperation have produced little of substance. Indeed, in the wake of the invasion of Georgia, Beijing may be seriously rethinking its relations with Moscow. It may not yet be ready to embark on a full-fledged policy of “containment,” but in the wake of the dismemberment of Georgia — and with Russia claiming a zone of “privileged influence” throughout the former Soviet world — China clearly views Russia as an emerging strategic threat.

END_OF_DOCUMENT_TOKEN_TO_BE_REPLACED

President Dmitry Medvedev says that if the Russian government does not take immediate steps, Moscow could lose the Russian Far East, a declaration that one Russian news agency called “unprecedented” and at the very least suggests Russia faces far more serious problems there than the Kremlin has acknowledged up to now.

Speaking to a conference on social-economic development in Kamchatka kray, Medvedev said that “if we do not step up the level of activity of our work [in the Russian Far East], then in the final analysis we can lose everything,” with that region becoming a source of raw materials for Asian countries. The consequences of further inaction, the Russian president said, could come not only quite quickly but “end in an extremely dramatic way” much as the Soviet Union did 17 years ago. And consequently, he called on the Russian government to “take administrative decisions” and not to get tied up with “other problems.

END_OF_DOCUMENT_TOKEN_TO_BE_REPLACED

Yesterday, Vladimir Putin blamed his country’s financial woes on the United States, condemning the “irresponsibility” of the American government, yet failing to acknowledge that Russian aggression has had a big impact in unsettling global confidence in Russia’s economy. Putin’s condemnation is just the latest in a long list of antagonism on the part of Russia. Recent events have made it amply clear that Russia is not only positioning itself as a resurgent superpower, but as a foil to the United States. Russia’s actions also make it obvious that the overriding principle of its foreign policy is to thwart America’s efforts around the world. Russia does this by arming and supporting America’s enemies, undermining and intimidating America’s allies, and subverting America’s policies whenever and wherever there is an opportunity for so doing.

Here are just some of the actions that Russia took in the last few months:

END_OF_DOCUMENT_TOKEN_TO_BE_REPLACED

Annals of the Russian Fix

A Spanish judge is probing whether the Russian soccer team that won the UEFA cup earlier this year did so using mafia-fueled bribes.  The sad thing about this is not the possiblity that the rumor is true, but how instantly credible it is that Russia could be involved in such activity. In fact, it’s not even a little bit surprising. ESPN reports:

Zenit St Petersburg manager Dick Advocaat has joined his club in expressing his dismay at allegations that the Russian club won the UEFA Cup by virtue of match-fixing.

Spanish newspaper El Pais claimed a judge had forwarded information to German prosecutors which claimed a gang with links to the Russian mafia had given money to Bayern Munich before their semi-final earlier this year.

END_OF_DOCUMENT_TOKEN_TO_BE_REPLACED 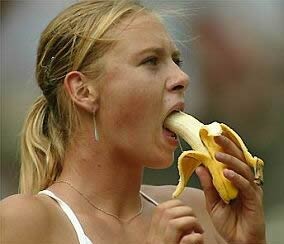 Only $10K and yours for the asking!

Ouch. A new low, in a very literal sense. Maybe she forgot to mention that she’d bring her banana.  Yahoo! Sports reports:

This is one of those stories that makes you shake your head in disbelief — first, that it happened, and second, that you didn’t get in on it in time. Seems the lovely Wimbledon champ Maria Sharapova put herself — well, a date with herself, anyway — up for auction at a charity tennis tournament. The winning bid was $10,000, which seems a bit below market value. Lobbing up the awkwardness quotient is the fact that Ms. Sharapova’s boyfriend apparently got outbid for the date. Think that was a comfortable ride home?

Oh, and one other thing — Ms. Sharapova took in $26 million last year, making her the world’s best-paid female athlete. That means that for her, a $10,000 bid is the equivalent of getting taken out for a McDonald’s Extra Value Meal. She’s lovin’ it!

Now, in auctioning off the mealtime services of a beautiful athlete, some may see crass, thinly-veiled sexism. Me, I see opportunity. We’ve got ourselves a bit of a financial crisis in America these days, right? Well, if Ms. Sharapova is willing to let herself go for a mere ten large, how much do you think Tom Brady could fetch? Natalie Gulbis? Dale Earnhardt Jr.? Derek Jeter?

Time to think outside the box here, people. We’ve given our athletes so much — is it so wrong to ask them to start giving back in return?