Robert Amsterdam, Asleep at the Switch? 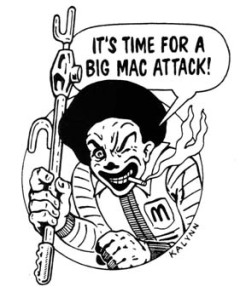 One of the maxims we live by here on this blog is Martin Luther King’s warning that moderates can be more dangerous to liberty than extremists. Accordingly, we have bone to pick with blogger (and Khodorkovsky attorney) Robert Amsterdam. Several, actually, and they have compound fractures. We ask his readers, a category in which we include ourselves (often admiringly so), to pressure him to wake up and smell the bitter Russian coffee brewing under his nose. These days, as Putin’s Kremlin makes moves like attempting to hand-pick jurors, we need lawyer Amsterdam to be hyper-vigilent, yet he often seems to be asleep at the switch.

First, we are outraged that Amsterdam has failed to republish and praise the Boris Nemstov white paper and its supplement on Gazprom, even though we have specifically reached out to him and asked him to do so.  In fact, he should be doing even more than that, and using his connections to lobby for op-ed space fore Nemtsov in major Western newspapers and funding to help him better educate the benighted people of his country.  Amsterdam’s failure to express solidarity with Nemtsov is unconscionable, and almost makes us think it’s something personal he (or his client) have against the former deputy premier, or maybe against us since we translated the text.  It’s good enough for the New York Review of Books, but not good enough for Bob Amsterdam.

Second, we are disappointed by Amsterdam’s failure to address his client’s recent moves to express submission to the maligant will of Vladimir Putin’s Kremlin, moves we have condemned here on this blog. We realize that a lawyer can’t exactly call his own client on the carpet, but Amsterdam owes the world some kind of explanation for his client’s repugnant behavior, since he has asked the world to lobby for his client’s freedom and gained international notoriety in the attempt. Sweeping it all under the carpet just won’t do.

And then there’s this whole business of the Big Mac attack.

There are about 30,000 McDonald’s restaurants in the world, nearly 120 countries.  Less than 200 of them (just 0.6%) are in Russia (roughly the same number as tiny Netherlands operates). The U.S. has nearly 13,000 Mickey D outlets; that means the average American state has over 25% more McDonald’s locations than the entire country of Russia, with 140 million people.

You can believe this:  If America has 300 million people and 13,000 McDonald’s outlets, then the company would like to have at least 6,500 in Russia (likely many more than that, since there is no health-food movement in Russia and no lawsuits over coffee that is “too hot” or local government trans fat regulations, and since there is a ridiculously low wage scale to boot).  In reality, however,, though McDonalds has been operating in Russia for three decades, Russia has less than 200 restaurants. Germany, with a third Russia’s population, has more than 1,000. Japan, with two-thirds Russia’s population, has more than 3,000.  That speaks volumes for what Russia means to business.

And just to be clear, it’s not at all that Russians don’t like cheeseburgers.   Individual Russian McDonald’s outlets are wildly popular everywhere they exist, serving nearly 1 million meals each per year on average, double the rate of an average American outlet.  This fact, of course, rather tends to make Russian condemnations of America and its culture and values, often made by Russians wearing blue jeans and Nikes and carrying an I-phone, seem quite ludicrously hypocritical. In fact, it’s surprising Russians can even get the words out, when their mouths are stuffed full of Big Macs and fries.

But the critical point is this: Try as you may you will not find Burger Kings, Wendy’s, Taco Bells, Jack-in-the-Boxes, Popeyes or Boston Markets sprouting up all over in Russia.  That is because, of course, Russia offers such an obscene variety of terrifying disincentives to foreign investment, from xenophobia to disease to crime to corruption.  McDonalds, always searching feverishly for new markets in its frenetic bid to take over the world, plunged blindly into Soviet Russia in the hope of striking a foothold, and used its massive corporate assets to stubbornly maintain it to this day. The Wall Street Journal has reported: “Other U.S. restaurant companies that tried to crack Russia’s $13 billion-a-year food-service industry also ran into problems. Russian restaurant magnate Rostislav Ordovsky says he tried to help Burger King Corp. open here in the late 1980s but that the fast-food company was scared off by Russia’s poor supply chain and the ruble-conversion restrictions.” $13 billion? That’s pocket change. The food service industry in the U.S. is worth more than $1 trillion.

All this by way of background.  We were surprised and disappointed to see Amsterdam badly bungle a story about Ronaldland a few days ago, and wish now to correct his misleading statements, and the even more dishonest reporting upon which he (apparently blindly) relied.

Amsterdam’s blog wrote: “Few people realize that the world’s most profitable and busy McDonald’s are located in Russia (Pushkin Square is #1, and Munich’s Karlsplatz Square is #2).”  But the Wall Street Journal he himself linked to reported: “McDonald’s doesn’t break out financial results for its Russian operations. Analysts say the chain’s profit margins here are in the mid-20% range, or several points higher than McDonald’s global average. ” So, in other words, nobody knows how profitable the McDonald’s Russia operation is, and the best guess is slightly above average — not world leader.  Amsterdam gave no source to substantiate his claim that the Pushkin McDonald’s is the world’s most profitable (high volume is not the same as high profits, especially not in a country as corrupt as Russia), and even if it is the statement is widly misleading in suggesting that the countrywide operation is similar.

We think it’s great whenever a foreign company is successful in Russia, but we just wish that it were true across all sectors. The positively successful experience of McDonald’s, as well as many other retail and financial institutions operating in Russia, drives home the point that the country continues to operate as a “dual state” – whereby normative rules and regulations actually function in certain segmented business areas, and a prerogative state operates in the strategic sectors, giving the state the ability to seize property with impunity.

To support this claim of “success” Amsterdam cites a blog item in the Candian publication The Financial Post called “Standing up for Russia” (to which he was apparently attracted because it mentions his name). He totally ignores the utter absence of any McDonald’s competitor in Russia, even though he links to the Wall Street Journal article cited above (did he read it?) and he ignores the pitifully small number of restaurants in-country given the large population (and supposedly booming economy).  In the FP article Amsterdam cites, George Cohon, the boss of McDonald’s Russia states: “We have 25,000 employees in Russia, US$1-billion in sales and net profits of US$200-million. We are in 130 countries and Russia is, by far, the best.”

By far the best?  200 locations in Russia are better than 13,000 in the United States? Metrics like that come only from Russia.  Better than 1,000 in Germany and better than 3,000 in Japan?  More money is made off them?  Gosh, Russians must really be gobbling up those quarter pounders!  Only a totally incompetent reporter could repeat such insane and insulting propaganda as unquestioningly as the FP’s Diane Francis did — and shame on Amsterdam for reguritating it so uncritically.  No attempt whatsoever is made to document the Cohon’s outrageous claim, nor could there be any since McDonalds does not publish that information.

In short, what Cohon was doing was simply currying favor with the Kremlin, as various other oily, toad-like bits of vermin routinely do in order to stay in the good graces of an arbitrary regime that could wipe them out without a moment’s notice. And of course, he was puffing his business like a good salesman.

Then Cohon heaps on more absurd lies:  “Overall, living standards are on the rise in Russia. Everyone has a car, there are suburban shopping malls, condo projects and a growing middle class.”

Everyone has a car? Everyone? Every single person? Even the babies?  But seriously:  Between 2002 and 2007 less than 12 million new cars were sold in Russia, meaning that at most 12 million Russians currently own a car that is less than five years old.  That’s less than 10% of the population.  It’s not, to say the least, everybody.  And how could it be? Russia has no reliable system of financing purchases like automobiles and homes. And why would it want one, when the average wage is less than $5/hour?

Living standards are on the rise? Well, if the average wage used to be $3/hour and now it’s $4/hour, that’s definitely a one-third increase.  But if you ignore the pitiful base on which this growth occurred, then you’re not really qualified to talk about economics. Same thing applies to the idea of a “growing middle class” — not only does Cohon ignore the fact that the miniscule base makes the growth rate irrelevant, he ignores the fact that “middle class” in a country with an average wage of $4/hour is hardly a meaningful term.  “Not quite starving” would be more accurate.

Cohon ends with this dazzler: “McDonald’s has had no trouble in terms of corruption or harassment in Russia for decades now.” So let’s just see if we understand.  No trouble with corruption. The best business of any country on the planet. And yet, for some strange reason, only 200 restaurants, and no competitors.

Well, that certainly is an odd paradox.  Odder still, and disappointing, that Amsterdam wouldn’t notice it.  All throughout Russian history, the country has been characterized by a small group of corrupt sycophants, like Cohon, telling everybody how well the country is doing just before it collapses, and a bunch of gullible outsiders believing them.  Isn’t it now time for this sordid practice to end?

This entry was posted in blogosphere, editorial, russia and tagged blogosphere, russia. Bookmark the permalink.

6 responses to “EDITORIAL: Robert Amsterdam, Asleep at the Switch?”