(1)  EDITORIAL:  The EU reaches out to Ukraine

(4)  A Russian on the Russia Problem

NOTE:  Kim Zigfeld’s latest masterpiece is up and running on Pajamas Media. This time she exposes Wired magazine, which has been suckered by a cadre of Kremlin stooges into publishing some ridiculous nonsense about Georgia’s behvavior during the recent war. At the root of it all is that wacko Gordon Hahn, who we’ve previously exposed right here on this blog, and his malignant cabal “Monterey Institute.”  It’s the latest chapter in the new cold war.

NOTE:  Though we routinely castigate the people of Russia for their cowardly acceptance of neo-Soviet rule, that doesn’t mean our greatest heroes aren’t Russians, and today’s issue makes that abundantly plain.  Items 3, 4, 6 and 7 all document heroic Russians fighting for truth and freedom and a better way of life for their children.  They are what this blog is all about.

NOTE: Ace reporter Michael Totten has extended new reporting on his blog from his travels in Georgia.

EDITORIAL: The EU Reaches out to Ukraine 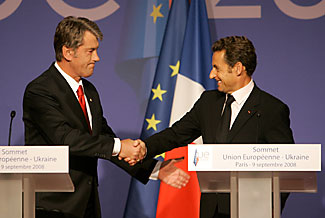 The EU Reaches out to Ukraine

In yet another sign of just how dismally Vladimir Putin’s foreign policy has failed, the European Union, led by French President Nicolas Sarkozy, held a summit meeting with Ukraine last week and signed a formal accord putting Ukraine on track to become the next EU member state.  Sarkozky boldly declared:  “We say solemnly that Ukraine is a European country that shares a common history and values with European Union countries.”  He noted that it was “the first time the union pronounces itself so clearly on the European destiny [of Ukraine].” He called Ukraine’s current borders “perfectly non-negotiable” and in earlier meetings with the Russians had forced them to formally agree to immediately withdraw all their forces from Georgia proper, beyond the borders of Ossetia, backing down on the “buffer zone” claims Russia had been trying to assert previously.

END_OF_DOCUMENT_TOKEN_TO_BE_REPLACED 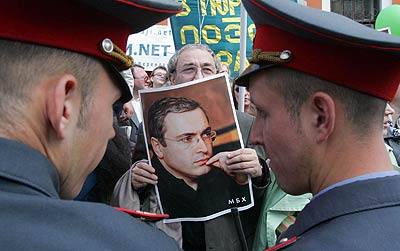 This man risked his life standing up for justice, but perhaps soon it will be the Putin goons who brandish the Khodorkovsky photo?

The Moscow Times has published a correspondence interview with jailed oil oligarch Mikhail Khodorkovsky.  Asked about Russia’s conduct during the Georgia invasion, the oligarch replied: “It’s important to understand that President [Dmitry] Medvedev had no other choice given situations on Aug. 8 and Aug. 26.”  In utterly repugnant fashion, the next day Russian “prime minister” Vladimir Putin echoed this theme in a speech to the malignant Valdai Discussion Club, albeit in less tactful language. Putin stated: “In this situation were we supposed to just wipe away the bloody snot and hang our heads?”  It was almost as if Khodorkovsky had set the table for Putin, and for all we know maybe he did.

A few weeks ago, we condemned Khodorkovsky for allowing so many people to lobby for his freedom and hope for his leadership, only to collapse like a craven coward at his parole hearing, begging for mercy and promising to be a good boy, a lackey of the Kremlin.  His remarks to the MT, sadly, only confirm how right we were to do so.

END_OF_DOCUMENT_TOKEN_TO_BE_REPLACED

Other Russia translates a comment from Andrei Illiarionov’s Russian-language blog on Live Journal, based on a reported interview of a Russian company commander:

Interview with a wounded company commander from the 135th motorized rifle regiment, in “Red Star,” [a Russian military newspaper]

“We were doing exercises,” captain Sidristy’s story starts. “This was relatively close to the capital of South Ossetia. Nizhny Zaramakh is a wilderness area in North Ossetia. We made camp there after our scheduled exercises, but on August 7th, the order came to move out towards Tskhinvali. We were raised to a state of alarm, and went on the march. We arrived, settled in, and already on August 8th the fire came down with such force that many even lost their bearings. No, everyone understood that Georgia was preparing something, but it was hard to even imagine what we saw. Immediately after midnight, a massive shelling of the city and peacekeeping positions was started. They hit it from all types of weapons, including artillery rocket systems.”

END_OF_DOCUMENT_TOKEN_TO_BE_REPLACED

A Russian on the Russia Problem

The Triumph of Weak Will

Translated from the Russian by FinRosForum

I find it very hard to formulate my recommendations. In response, I would like to pose my own question: “What are European politicians prepared to do? Is Europe prepared to give up some of its comfort for the sake of defending, –not just in words but in deed,– the great principles of freedom enshrined in its constitution?”

END_OF_DOCUMENT_TOKEN_TO_BE_REPLACED

Robert Amsterdam’s blog does not get nearly enough credit for their translations into English from languages other than Russian.  Following is his translation from the German of a web posting on neo-Soviet propaganda, which was carried out at our urging. But for the blogosphere, this kind of thing would never see the light of day in English; the item was cited by us last week for its revelation regarding the mistreatment of Russia Today reporter William Dunbar.

The fight for the right of interpretation between Russia and Georgia has broken into a full-fledged battle. It is taking place parallel to the fights on all channels – on television, in newspapers and especially in the Internet.

A familiar, almost hackneyed, quote: “When war breaks out the first victim is the truth”. Yet this insight from US Senator Hiram Johnson of 91 years ago applies for 2008 as well: For five days there was fighting in Georgia and the situation was unclear, more than anything. It is difficult for journalists to confirm statements made by the warring parties and have them verified by independent positions. The hardliners in Russia and Georgia are fighting to influence the opinions in the rest of the world.

An example: Russia’s ambassador in Georgia spread the message that 1500 people died as a result of the Georgian attacks on Tskhinvali in the first night of the war. It took days for aid organizations to gain an overview. A representative from the human rights organization Human Rights Watch mentioned around 200 wounded in the area of Tskhinvali in the Frankfurter Rundschau. No one knows the actual number of deaths, but it is most likely significantly lower than what the Russian side has been saying. The objective was reached; the numbers made their rounds for days, were reported and, so they hope, are now fixed in people’s minds.

END_OF_DOCUMENT_TOKEN_TO_BE_REPLACED

Mikhail Kasyanov served as Russian prime minister from 2000 to 2004. Friendly to the West and outspoken on the need for democratic reform, he was stripped of his job as then-President Vladimir Putin gradually centralized power. Since then, Kasyanov has taken up a prominent position among Russia’s dwindling opposition, running for president until the Central Election Commission early this year accused him of forging signatures and banned his candidacy. The Times interviewed him this week in his office.

LOS ANGELES TIMES: Many in the West believe that Moscow deliberately provoked a confrontation over Georgia’s breakaway republics. Who do you believe is responsible for the eruption of armed conflict?

MIKHAIL KASYANOV: The Russian Federation relentlessly provoked the conflict in every way, and unfortunately the Georgian leadership gave in and used armed force. In response, the Russian Federation, instead of fulfilling its peacekeeping mandate, started a large-scale war against the independent sovereign state of Georgia. Not only the disproportionate use of force, but in fact a full-scale war.

END_OF_DOCUMENT_TOKEN_TO_BE_REPLACED

Latynina on the Russian Quagmire

As everyone who watches Channel One and Rossia television knows, the West does not have a lot of warm feelings for Russia and is definitely out to get us. The West wants to create a unipolar world — one that would like Russia to become its permanent appendage. In response, Moscow is trying to create its own unipolar world, recruiting countries like Venezuela, Libya, North Korea, Iran, Syria and Cuba to its anti-West axis.

Despite its deep dislike of the West, Russia’s patriotic elite drive Mercedes cars, educate their children in London, buy villas in Nice and keep their money in Swiss bank accounts. Its stores sell Finnish toilets, Western designer clothes and German refrigerators. Unfortunately, there is not much worth buying from Syria or North Korea. The only thing they can produce is a lot of anti-Western rhetoric, and unfortunately, you can’t package this bluster and sell it in stores.

END_OF_DOCUMENT_TOKEN_TO_BE_REPLACED

The Sunday Funnies: Ellustrator on Putin/Medvedev 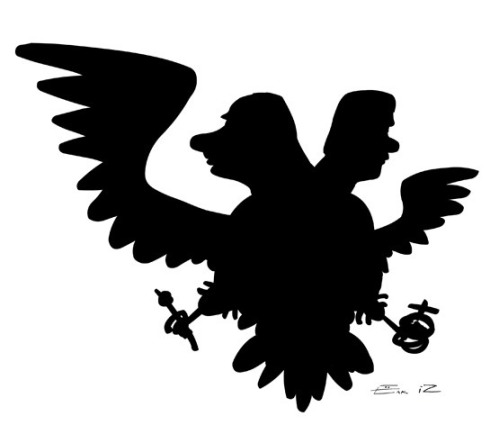