The Russian stock market has plunged below the 1400 psychological barrier and, as shown above, its key indexes are down nearly 45% since June

The Russian stock market continues its freefall, and the Kremlin is in full-on panic mode.  As the graphic above indicates, the RTS metals index is down 45% from its June position, and the other indexes are hot on its heels.  The Moscow Times reports:  “Hit by the news that second-quarter economic growth fell to 7.5 percent, from 8.5 percent a quarter earlier, and a year-to-date inflation figure of 9.8 percent, the dollar-denominated RTS fell to 1,309.49 points, a two-year low, closing at 1,334.33, a fall of 4.4 percent. The more liquid, ruble-denominated MICEX fell 3.8 percent to 1,114.67 at the close, its lowest level in 27 months.”  And this in a climate of radically higher oil prices! Do you dare imagine what would be happening to this market if oil was still at $60 a barrel?  UPDATE:  The following day, the market crashed through the 1300 psychological barrier to close at 1298.08 on the RTS, ignoring the reassurances given by “president” Medvedev, as described below.  The MICEX was flirting with triple digits, and Russia was warned against artificially inflating the market with a government cash infusion, on pain of a reduced credit rating.

END_OF_DOCUMENT_TOKEN_TO_BE_REPLACED

(2)  Another Original LR Translation:  About those Ossetian Passports, via Essel

(4)  Neo-Soviet Russia, on the Warpath

(5)  Another International Evaluation, another Pathetic Failing Score for Russia

(6)  On the Russian Anschluss into Georgia

NOTE: Today we offer a jolting array of reports from the front lines of the new cold war with Russia, which is heating up with every day that passes. Russia’s only hope for victory is that Chamberlainian appeasement will rule the day.  We also offer a stunning variety of original content which no other Russia blog in the world can match. We’ve edited Boris Nemstov’s brilliant addition to his White Paper, focussing now on Gazprom; we’ve translated from the Russian press, and we’ve editorialized at length on the new cold war.

“Pride goes before destruction, a haughty spirit before a fall.”

In 1964, a Stanley Kubrick film called Dr. Strangelove: How I learned to stop worrying and love the bomb was nominated for four Academy Awards. It’s a film about how America screws up and allows a rogue general to instigate a global thermonuclear apocalypse. Can you name the Russian counterpart of this film, where the Russians express similar doubts about their government’s ability to manage their nuclear weapons programs? No? We didn’t think so. That’s because there isn’t one. And that, as much as anything else, explains why America beat Russia in the first cold war.

And now, it’s starting all over again.

At the beginning of August, Russian forces crossed the boundary of Georgia’s breakaway province of Ossetia and stormed into Georgia proper, bombing civilian targets in the city of Gori.

At the beginning of September, the United States retaliated by sending an armada of warships into the Black Sea to provide humanitarian aid to Georgia, and disregarding Russian protests.

Russia then replied by scheduling anti-U.S. war games in cooperation with Venezuela. “President” Medvedev stated: “I wonder how they would like it if we sent humanitarian assistance using our navy to countries of the Caribbean that have suffered from the recent hurricanes.”

It’s predictable, then, that NATO will now schedule anti-Russian war games in places like Poland, Estona, Ukraine and Georgia. Russia will retaliate, and soon the two sides will realize that the games might become quite real at a moment’s notice. This will compel them to boost their military capacities, leading to a new arms race.

END_OF_DOCUMENT_TOKEN_TO_BE_REPLACED

Another Original LR Translation: Now, About those Ossetian Passports, via Dave Essel

translated from the Russian by Dave Eseel 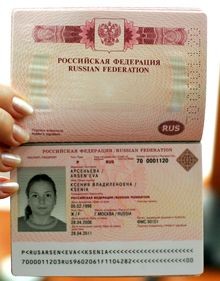 South Ossetia has a population of 60 thousand people. Almost all of them hold Russian passports. Strangely enough, who ordered that they should be given them and why is still a mystery. Some say it was A.S. Voloshin [former chief of Russian presidential administration] but he is not being asked to step forward. For his part, he is keeping his mouth tight shut.

Be that as it may, Ossetians, unlike, say, many of the people from the Caucasus living in Moscow, most certainly did not have to pay for their passports. On the contrary, it was Russia which paid for the pleasure.

Over the last 10 years, South Ossetia has received $100 million a year, paid out of the Russian budget. Of course, no accounts for these funds have ever been produced. No one is asking how precisely Mr. Kokoity spent the money – on the needs of his people, of course. That’s clear since no one is complaining, right?

Then came the war.

END_OF_DOCUMENT_TOKEN_TO_BE_REPLACED

Nemtsov on Gazprom via Novaya Gazeta

Boris Nemtsov and Vladimir Milov, writing in Novaya Gazeta‘s English edition, offer the following analysis of the Gazprom empire (we have edited the orginal translation for linguistic issues and we have reproduced only one of the numerous tables offered by the authors; the others can be found by following the link). It is a continuation of the authors’ brilliant and courageous White Paper which we have previously translated and published through the good offices of columnist Dave Essel.

In February 2008 the authors of this paper published an independent expert report titled “Putin, the Bottom Line,” where we presented our vision of the results of the administration of of the second president of the Russian Federation. In that report we gave an uncomplimentary, though fair, assessment of Vladimir Putin’s work in various spheres of our life – the economy, the army, the pension system, the health care system, road infrastructure and other areas. The report was based on figures and facts concealed from Russian citizens by official propaganda.

Many readers noted that there was one issue upon we had touched too lightly, namely the Russian energy industry in general and Gazprom natural gas monopoly in particular.

That was not an accidental omission by us. We considered that the situation involving Gazprom required special consideration which would not be possible to fit in just a couple of paragraphs within our brief white paper. First, because Gazprom plays such a central role in pumping the lifeblood of our nation. Second, because we have first-hand knowledge of Gazprom’s problems, having had direct involvement with the company in our professional activities as a former fuel and energy minister and the deputy energy minister of Russia. Third, because Gazprom has been a kind of special and personal project of Mr. Putin. From the very beginning of his presidency he has cared for the company in a special way, appointing his closest confidants to the key posts in the company and looking into all the details carefully. Gazprom is one of few the projects where Putin can be considered personally responsible for the results, from the beginning of his tenure in office, and one of the projects to be taken as a central criterion for assessment of Putin’s presidential activities, a litmus test if you will.

In this present paper we intended to continue the method of analysis we began in our White Paper and to focus on what has been happening to Gazprom these past few years.

END_OF_DOCUMENT_TOKEN_TO_BE_REPLACED

Neo-Soviet Russia on the Warpath

Edward Lucas, writing in the Times of London:

Picture yourself as the autocratic leader of a small-ish former Soviet republic, bubbling with oil and gas and keen to sell it. But where? One route is old, cheap and easy. It leads north, to Russia. But memories of the Kremlin’s imperial embrace are still fresh. The other is new, costly and tricky. It goes west, in both senses – via your neighbour, Georgia, and to supply Western customers direct.

END_OF_DOCUMENT_TOKEN_TO_BE_REPLACED

Russia is in the bottom 10 percent of countries when it comes to business-friendly reforms, while the world’s top reformer is Azerbaijan, the World Bank said in a new survey. Azerbaijan, which like Russia depends heavily on its oil and gas resources, shot up from 97 to 33 in the survey, which ranks 181 countries in order of ease of doing business. Russia, by contrast, enacted no new legislation to ease conditions for doing business in the last year and fell in the rankings to 120, down from 112 the year before, said the report, to be published Wednesday.

END_OF_DOCUMENT_TOKEN_TO_BE_REPLACED

On the Russian anschluss into Georgia

I was in Tbilisi recently to report on the Russian anschluss into Georgia. You must not expect me to be impartial on the matter. I have visited Georgia four times in as many years and witnessed the country’s self-transformation after its Rose Revolution. It went from two centuries of asphyxiating “protection” by Russia, followed by a post-Soviet decade of mafiotic corruption, to a kind of light unto nations under its young president, Mikheil Saakashvili. One hesitates to cite Wordsworth’s rather breathless and famously wrongheaded lines on the French Revolution–“Bliss was it in that dawn to be alive/But to be young was very heaven”–but in Tbilisi they seemed precisely right.

END_OF_DOCUMENT_TOKEN_TO_BE_REPLACED

Reader “Simona” has translated the following two reports from the Russian media regarding the harrassment of journalists attempting to report on the Russian invasion of Georgia.

A patrol of the Russian and Ingushetian military detained members of a Polish public television crew with their Georgian guide near Karaleti village, which lies between the South Ossetian capital Tskhinvali and the Georgian city of Gori, said on Monday the Polish Television. All the crew’s equipment was confiscated, including cameras and mobile phones. The detainees were driven off to an undisclosed destination, said the report. The website of the Polish television also reports that the local authorities are considering the journalists as “prisoners of war”.

Russian soldiers in the village of Tsaishi detained Giga Kilasonia, a cameraman of the Obshchestvenny Veshchatel television, and Rustavi-2 television reporter Emma Gogokia, who were trying to film illegal Russian military checkpoints in Tsaishi, gazeta.ru reports, citing its Tbilisi correspondent. According to the report “While the journalists were filming, three armoured personnel carriers arrived, and the Russian soldiers ordered them to stop filming. They took away the keys of the cameraman’s car, and tried to force the journalists into one of the armoured personnel carriers. When the journalists refused, the soldiers roughed them up. Forty minutes later, representatives of the UN arrived and the journalists were released after their intervention.”

Robert Amsterdam has video on the confrontation.

Watch out, Mr. Hankey — Vladimir Putin knows where you live!  He has a plunger and he’s not afraid to use it!