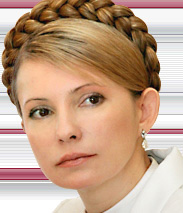 A Fateful Choice in Ukraine

On August 13th, Ukrainian Prime Minister Julia Tymoshenko (pictured) declared in response to the Russian invasion of Georgia: “We stand in solidarity with the democratically-elected leadership of Georgia. Georgia’s sovereignty and territorial integrity must be respected.”

The day before, she had announced that her personal envoy would visit the Georgian capitol in a physical expression of solidarity. Two weeks later she repeated her call for solidarity, stating: “Georgia’s territorial integrity is a solemn matter both for Georgia and Ukraine.”

Yet, yesterday the Telegraph reported:

Tymoshenko has revealed that she has been summoned by prosecutors to answer [President Viktor Yushchenko’s] charge of treason as Ukraine’s two rulers battle it out for power ahead of a 2010 presidential vote over their country’s future direction. President Yushchenko has accused the prime minister of failing to condemn Russia’s actions in Georgia, and the presence of the Russian naval fleet in Ukraine, in exchange for political support from the Kremlin. Tymoshenko hotly denies the allegations. The Ukraine’s prosecutor has declined to comment.

Tymoshenko’s party, as trumpeted by Kremlin-controlled wire service RIA Novosti, has declined to vote in support of Yushchenko’s resolution condemning the use of Russia’s Black Sea fleet, based in Ukraine, against Georgia during the invasion. The Jamestown Foundation reports that according to Yushchenko’s “aide Andry Kyslynsky, Moscow reportedly has earmarked $1 billion to back Tymoshenko’s presidential bid.”

In short, Russia’s action in Georgia has accelerated the fateful choice Ukrainians must make, whether they will return to subjugation by the malignant empire of Russia, or set their own course towards a European future. Two-third of Ukrainians have expressed a clear preference to join the EU, but they are less sure of themselves on NATO membership and one-third of the country prefers enslavement.

Stratfor says that “Tymoshenko has recognized the reality of a resurgent Russia and is hedging her bets with Moscow. She has refused to allow Ukraine’s parliament to adopt an anti-Russian stance, and has declared that she will not allow Ukrainian authorities to evict the Russian fleet or ban it from moving in Ukrainian waters. Timoshenko also refused to be part of the official delegation that went to Tbilisi on Aug. 9.” Stratfor, too, says it is hearing from anonymous sources that Moscow has promised Tymoshenko to fund her bid for the presidency in 2010 if she supported Moscow on Georgia.

According to Stratfor, Tymoshenko believes that Ukraine cannot be brought fully into the Western fold. She believes that when NATO membership is finally offered, Russia will make a grandstand play similar to the one it just made in Ossetia, by which it will call upon the pro-Russian sections of Ukraine to defect, and support them militarily if they seek to do so. Stratfor concludes: “For Russia, it does not matter who is the personality running Ukraine as long as that person is listening for Moscow’s orders. Russia is willing to back Timoshenko as long as she proves useful in Moscow’s move to pull Ukraine back into its former master’s orbit.”

So it appears Tymoshenko and the Kremlin could be playing a double game. Tymoshenko may hope to keep the country united and as far outside Russia’s grasp as possible, while the Kremlin hopes to insidiously undermine the pro-West component of her support and, ultimately, bring her down and a capture a collapsing Ukraine when this occurs.

President Yushchenko, on the other hand, may believe it preferable to escape a neo-Soviet Russian empire with at least a portion of Ukraine, as West Germany escaped the USSR, and to seek reunification when the neo-Soviet empire inevitably crumbles. He may even hope the West will do the right thing and immediately bring Ukraine within the protective embrace of NATO, thus denying Russia the ability to invade and sever a section of the country, starting of course with the Crimean penninsula. The Jamestown Foundation is worried: “Yushchenko has painted himself into a corner. If [his party] does not change its mind, there will be either a Tymoshenko-Yanukovich coalition, or an early election. Neither outcome is good for Yushchenko.”

It would be hard to blame Tymoshenko for seeing that idea as a fairytale, given the limp-wristed response Europe has made to the Georgian invasion, and it is harder still to blame her for wanting to keep her country together. If she is indeed proved after trial to have made a secret deal to accept financial support from Moscow, she is a traitor who deserves hanging. But if that is a blustery attack being made by Yushchenko in lieu of an honest national debate on Ukraine’s future, then it is he who will deserve harsh retribution. Both leaders need to set aside their personal interests and realize that, quite literally, they are writing their country’s future for decades to come.

This entry was posted in russia. Bookmark the permalink.

14 responses to “Special Extra — EDITORIAL: A Fateful Choice in Ukraine”