(1) EDITORIAL: Is Dima Medvedev a Liar, or Just an Idiot?

(3) Essel on Making the Russians Keep their Word

(6) Applebaum Asks: What is Russia Afraid of?

NOTE: A bipartisan group of U.S. legislators is calling for an invitation to Georgian President Mikheil Saakashvili to address a joint session of Congress. If you’re an American, call or write your representative or senator and tell them you support this outstanding initiative! If you’re not, contact your own national legislature and ask them to do the same.

NOTE: Check out Civil.ge for updates on Georgia from the source.

EDITORIAL: Is Dima Medvedev a Liar, or Simply an Idiot

Is Dima Medvedev a Liar, or Simply an Idiot

Russia’s so-called “president” Dmitri Medvedev told the President of France his troops would stop fighting a few days after they invaded Georgia with no warning to the international community, much less to Georgia.

Instead of doing so, they then plunged deeper into Georgia, threatening the capital, and blew up the main railway line linking the country east to west.

The world became furious, and demanded that a ceasefire be imposed.  Medvedev signed a second agreement, pledging to begin withdrawing his forces on Monday.  But the New York Times reported early Tuesday morning Moscow time that, once again, Medvedev was not true to his word.  The paper wrote:

END_OF_DOCUMENT_TOKEN_TO_BE_REPLACED

Film history pop quiz for Russians:  What movie was made in 1944, directed by Jacques Tourneur (“Cat People” and “Berlin Express”) and starring screen legend Gregory Peck?

END_OF_DOCUMENT_TOKEN_TO_BE_REPLACED

Making the Russians Keep Their Word

Russia honors most treaties more in the breach than in the observance. Though unlikely to surprise readers of LR, the non-withdrawal of its forces from Georgia is nothing more than international banditry. Russia behaves the same way with contracts (ask TNK-BP and a host of others!). I really don’t know why governments and businesses bother to conclude any such things with Russia.

Just as Basmanny Sud (Court) is now a byword for ‘telephone justice” under which the judge gets a phone call from above with instructions on what verdict to bring in, we do not have to look far for a byword for dishonourableness – “Russian treaty observance” provides the necessary oxymoron.

I have written recently about looking for ways to provoke and infuriate Russia in response to its recent outrages. Thinking about this brought to mind a very vague and distant recollection from the 1st Cold War of a European city council (Brussels) supporting a dissident (Solzhenitsyn) by renaming the street in which the Soviet Embassy was located to that dissident’s name and then officially advising the Soviet Embassy that incorrectly addressed mail would be returned to sender. I can imagine the vicious fury of the Soviet bureaucrats at this treatment.

END_OF_DOCUMENT_TOKEN_TO_BE_REPLACED

The brilliant Pavel Felgenhauer, writing in Novaya Gazeta and translated by Robert Amsterdam:

Today it is perfectly obvious to me that the Russian incursion into Georgia was planned in advance, moreover the final political decision to complete preparation and begin the war in August was, it would seem, taken already in April.

END_OF_DOCUMENT_TOKEN_TO_BE_REPLACED

Writing in the Detroit Free Press Frank Richter, who taught international relations at Wayne State University and is a member of the World Affairs Council, exposes Russia’s fundamental failure in the Georgia war:

Russia’s invasion of Georgia came at a huge cost. The Russian causality rate was nearly 100 times the rate suffered by U.S. forces during the Iraq invasion. Russian media estimate the invasion force to number between 8,000 to 15,000 men, with 74 soldiers killed.

Russia has a long history of military disasters. Most of its largest neighbors have defeated Russia in war. For the Russian public, it is this memory of military misfortune that makes Moscow’s illusory victory over Georgia meaningful.

END_OF_DOCUMENT_TOKEN_TO_BE_REPLACED

What is Russia Afraid of?

Forty years ago this week, on the night of Aug. 20 and early morning of Aug. 21, 1968, thousands of tanks and hundreds of thousands of soldiers rolled into Czechoslovakia. The goal of the invasion was straightforward: to prevent a Soviet satellite from carrying out democratic reforms, which, if they had been allowed to succeed, could have threatened the legitimacy of the governments of the other Soviet satellites and, indeed, of the Soviet Union itself.

END_OF_DOCUMENT_TOKEN_TO_BE_REPLACED

Regarding your recent editorial about “insane Russia” I would ask:  Who says that Russian insanity is only an external issue?

You should know that another foreign investor(largest foreign hightech investor in  Russia, with assets more than 10 billion USD), is being frisked by the  Russian “legal” system. Just a few days after TNK-BP! Same corrupt court. And Medvedev sits in the Kremlin and babbles about “the rule of law”! Such issues abound.  Follow Alfa Bank’s activities, if you want to learn about Russian high-level corruption, and what makes the Putin system tick. Alfa, for instance, holds an exclusive long-term contract as financier for Rosboronexport. Ring ring?

Meanwhile, CNN was blacked out in Moscow on Monday by a certain major cable TV firm without explanation. And I’ve been having difficulty accessing the Moscow Times website.

The Russians are as rabid domestically, as they are internationally!

LR RESPONDS:  We also have noticed the problem with the MT website from time to time in recent days.  Has anyone else? 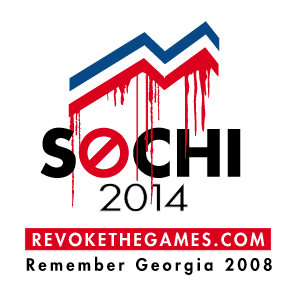 Russia does not deserve to be an Olympic host!

Help shut down the Sochi 2014 Olympics. Click here to learn how you can help.